BY hellodrdavis on March 13, 2020 | Comments: one comment
Related : Soap Opera, Spoiler, Television, The Bold and the Beautiful 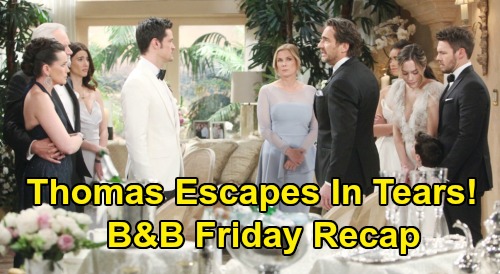 The Bold and the Beautiful spoilers recap for Friday, March 13, reveal that Bill Spencer (Don Diamont) griped to Wyatt Spencer (Darin Brooks) about Thomas Forrester (Matthew Atkinson) at Spencer Publications. He blasted the situation that Thomas had put Brooke Forrester (Katherine Kelly Lang) and her family in, and he railed against Ridge Forrester (Thorsten Kaye) for expecting her to welcome Thomas back with open arms.

Wyatt noted that Thomas was Zoe Buckingham’s (Kiara Barnes) problem now, and Bill quipped that anyone naive enough to marry Thomas deserved him, and that the marriage was likely just a smokescreen. He went onto say that he really appreciated Hope Logan (Annika Noelle) for stepping up to help out with Douglas Forrester (Henry Joseph Samiri), and he wanted to help protect Douglas from “that maniac” Thomas.

Meanwhile, at the Forrester mansion, Thomas marveled as Hope said that she couldn’t let him marry Zoe. Zoe said, “Thomas, don’t you even dare leave me at this altar,” and she begged Thomas to forget about Hope. Thomas turned to Zoe and said that this had to be a shock, but that Hope was the mother of his child and that he had to give it a shot. Zoe then hauled off and slapped Thomas big time.

Thomas walked toward Hope, saying that she was making him the happiest man in the world. Brooke stepped in, saying that Hope didn’t need to do this. Hope told her mother that she knew what she was doing. Thomas mused that he designed that gown specifically for Hope, and that their family was finally going to be complete.

But as Thomas walked forward to embrace Hope, she said that the only reason she was wearing the gown was to expose him, and that Steffy Forrester (Jacqueline MacInnes Wood) had told her and Liam Spencer (Scott Clifton) everything. Thomas turned to Steffy, saying, “No.” Hope went on, saying that Thomas had used Douglas.

Ridge stepped forward and asked if this was all true. Thomas denied it, saying it was all a big misunderstanding. Zoe then piped up, saying that Thomas won’t be marrying either her or Hope, and that he’s still completely obsessed with Hope. Zoe railed against Thomas, saying that Hope had come to her with her plan and that she agreed to it. Thomas was stunned, and he told Zoe that they could move past this.

Zoe told him that he was out of his mind, and that she’ll never be someone’s consolation prize. She said that she had actually loved Thomas and believed in him, but that in the end she was just a pawn in his game, just like Douglas. Zoe said that now everyone knows exactly who Thomas is, and that he’d never take advantage of her or Hope ever again.

Liam then stepped forward and said that this was game over. Steffy chimed in that Hope and Liam know how they were manipulated by the kiss, and that that’s when Hope came up with this plan to expose Thomas. Steffy said that Ridge had nearly ruined his marriage with Brooke because of Thomas’ lies. Thomas protested, saying that he did all this for Douglas, then he asked where Douglas was.

Douglas emerged from behind a table and Thomas asked him to tell Hope how much he wants them to be a family with Hope. Vinny Walker (Joe LoCicero) then jumped up, telling Thomas not to do that to Douglas. Hope said that Douglas was fine, and that she had explained to him why she was going to do this, and that Douglas had disclosed that Thomas had encouraged him to beg her to marry him.

Thomas was horrified to learn that Douglas was in on the plan. Douglas said, “It was bad of me to lie to mommy and Zoe. I want to be with Mommy, Liam, and Beth. I’m happiest there with them, Daddy, not with you.” Thomas was absolutely stunned, and then Eric Forrester (John McCook) expressed his disappointment in him.

Liam gloated that he knew all along that he was right about Thomas, and that they had to do things this way. Thomas said that they weren’t going to take Douglas from him, but Liam said confidently that Douglas wants to be with him and Hope, and that they can make his dream of a family come true.

Brooke asked Thomas if he knew how hard it was for her to be estranged from Ridge all this time, then she turned to Zoe and Hope and said that she was proud of them. Ridge walked over to Brooke and said that he was sorry, and that he hoped she could forgive him. Brooke said that she knows that he loves Thomas and just wanted to give him a chance.

Thomas turned to Ridge and asked him what he was doing and claimed to need his love and support. Ridge said, “You’re my son. I will always love you and want what’s best for you. But you played me.” He blasted Thomas for learning nothing after the lies he told about Beth Spencer (River Davidson and Madeline Valdez) and for using Douglas and Zoe.

Thomas started crying as Ridge turned away and said that he couldn’t even look at him. Hope walked up to Thomas, wondering if his tears were even real. Hope told Thomas that he didn’t know how to love, and that she wanted nothing more to do with him. “You are finished playing games with my family,” she said. Thomas kept crying as Hope said that she would raise Douglas the way he should be raised, and that it was over.

Thomas looked around the room at everyone sadly as he kept crying. Finally, he looked at Douglas, then walked out the front door. Liam picked up Douglas and told him it would be ok, and Liam, Hope, and Douglas looked at each other happily.

That was a great episode, and there’s more on the way next week, so be sure to stay tuned to B&B! For more exciting developments, visit CDL often. We’ll keep you informed as B&B news and spoilers come in.