BY Heather Hughes on March 13, 2020 | Comments: one comment
Related : Soap Opera, Spoiler, Television, The Bold and the Beautiful 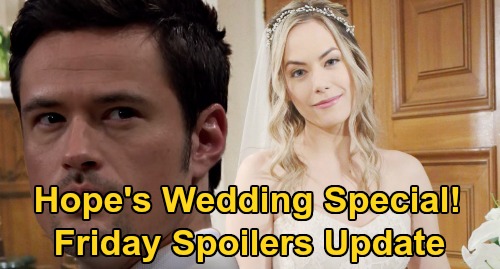 The Bold and the Beautiful (B&B) spoilers update for Friday, March 13, teases that Thomas Forrester (Matthew Atkinson) will be over the moon. Hope Logan (Annika Noelle) just came downstairs wearing the showstopper gown that Thomas had in mind. She really cut it close, but now Thomas is breathing a huge sigh of relief. He clearly feels confident he’s going to get the happy “Thope” ending he expected.

Thomas is counting on Hope to offer herself up as a bride instead – and it looks like that’s exactly what she’ll do. The Bold and the Beautiful spoilers say Zoe Buckingham (Kiara Barnes) isn’t going to like this one bit, but Thomas probably won’t pay much attention to her. He’ll be focused on Hope and how she’s seemingly going to become his wife.

Of course, that means Thomas will have to break the news to Zoe and the guests. Hope might suggest that she’ll marry Thomas – but only if she’s the one he really wants.

Hope might argue that this shouldn’t be about Douglas Forrester (Henry Joseph Samiri) or anything else. Hope plans to expose Thomas’ manipulation, so she may trick him into confessing that this is the outcome he was hoping for.

Once Hope pries an admission out of Thomas, she can drop the bomb and reveal this was all a ruse. Zoe’s sure to be crushed as all this plays out in front of her. She’ll discover Thomas’ true motives and face plenty of heartache.

The same goes for Ridge Forrester (Thorsten Kaye), who wanted to believe his son had changed. Ridge will ultimately see that Brooke Forrester (Katherine Kelly Lang) was right about Thomas, so at least “Bridge” can reunite.

The only problem is Brooke recently shared a kiss with Bill Spencer (Don Diamont) – and that kiss is bound to come back to bite her sooner or later!

In the meantime, Bill will share his point of view with Wyatt Spencer (Darin Brooks). He’ll slam Brooke and Ridge’s relationship in Friday’s B&B episode, which will catch Wyatt off guard.

This could lead to questions about Bill’s feelings for Brooke, but he’ll mostly concentrate on his “Bridge” disdain. Bill just won’t think Ridge is a good match for Brooke, especially when he’s been so stubborn about Thomas.

The Bold and the Beautiful spoilers say Bill’s updates will give Wyatt a lot to think about. Will Wyatt grow suspicious of Bill and Brooke’s connection? Will he fear his dad’s going to wreck things with Katie Logan (Heather Tom)?

B&B fans won’t want to miss the twists and turns ahead. Stick with CDL for more Bold and the Beautiful spoilers, updates and news.