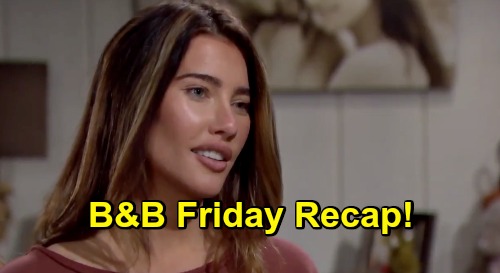 The Bold and the Beautiful spoilers recap for Friday, October 16, reveal that Liam Spencer (Scott Clifton) told Steffy Forrester (Jacqueline MacInnes Wood) that she should ask herself if getting in deeper with John “Finn” Finnegan (Tanner Novlan) was the healthiest thing she could be doing right now.

While Liam was going on about whether this move with Finn was the right thing for Kelly Spencer (Colette and Avalon Gray), Finn walked in, having forgotten his phone.

Finn immediately said, “Don’t do that, don’t mess with Steffy’s head like that,” and to Steffy, Finn said, “He’s trying to make you doubt your own judgment.” Finn asked where Liam’s concern was coming from, and he stated that if Steffy wanted to stop seeing him, that was her decision to make – not Liam’s.

Steffy said that she appreciated the guys’ concern for her, but that she was good, and she told Liam specifically that she could make her own decisions when it came to her personal life. “I would never have a man in Kelly’s life if I didn’t think he’s be a good influence on her,” Steffy said confidently. Finn beamed.

Steffy went into see Kelly in the bedroom, and Liam blustered to Finn that he had every right to voice concerns. Finn said that he understood, and if the situation were reversed, he might do the same. “I’m not here to upset you or take your place. I don’t owe you any promises, but know that I want what’s best for both Steffy and Kelly,” Finn said.

Liam acknowledged that Finn was saying all the right things, but that his gut had a good track record and that there was something about Finn that he didn’t trust. Later, Steffy returned to the room and Liam was gone.

Finn gushed that he liked what Steffy said to Liam about him being a good influence on Kelly, and he said that the liked Steffy’s beautiful smile. “I will do everything I can to make sure it’s here to stay,” Finn said happily.

Finn wondered if Steffy wanted some privacy, and Steffy said that she was a single mom and didn’t know what privacy was. Finn mentioned that his own house was big and empty, and that he always wanted to be a dad, but work came first. “I think you would be an amazing dad – you’re caring and funny,” Steffy said.

Finn said that he can see why Liam is so protective of Kelly, and that he’s not angry with Liam. “There’s no reason for us to be at odds,” Finn said, noting that he wanted to make sure that Steffy knew how special she was. “You’re doing a good job,” Steffy said, and Steffy and Finn kissed happily.

At Carter Walton’s (Lawrence Saint-Victor) loft, Carter told Zoe Buckingham (Kiara Barnes) that they could be really happy at the loft together.

Zoe said that she could see that too, but that while she was touched by Carter’s offer, she couldn’t accept it. Carter’s face fell, and he wondered if he misunderstood Zoe’s feelings. Zoe said no, but that everything she’s gone through this year has taught her not to rush into anything.

Zoe referenced her failed relationships with her dad Reese Buckingham (Wayne Brady), Xander Avant (Adain Bradley), and Thomas Forrester (Matthew Atkinson), and she said that she really cared about Carter, but that she needed some more time to think about this.

“Ok, so it’s ‘not yet,’ not a no,” Carter said, noting that the offer stands. Zoe promised to think about it.

In the Forrester Creations CEO office, Hope Spencer (Annika Noelle) and Thomas were wondering about Liam’s visit with Steffy when Zende Forrester Dominguez (Delon de Metz) entered, saying that he couldn’t find Zoe to go over the design details.

Zende wondered what was upsetting Hope, and Hope and Thomas rehashed the situation with Liam being suspicious about Finn. Hope wondered if Liam’s overprotectiveness was his inability to see Steffy move on with another man.

Thomas then tried to shoo Zende away, and he made the case for Hope to work with more than one designer on her line. Thomas got an alert on his phone and had to rush off. Once he got to the reception area, he dropped his phone and bumped his head on the desk getting up, just as Zoe walked up, wondering if he was ok. Thomas walked off, and Zoe entered the CEO office.

Zende and Zoe moved over to the design office, where they talked about Zende’s design mockup. Zende wasn’t entirely happy with it, but Zoe thought it looked good. Zoe offered to model the design to help Zende go over the alterations. “I’m ready and willing if you are,” Zoe urged.

Later, Hope was alone in the CEO office when Liam walked in. Hope wanted to know how the reunion with Steffy and Kelly went, and Liam mentioned that it was good, and that he had to wait for Finn to leave to talk with Steffy. “Did you chase him off?” Hope asked warily.

Liam went into his usual spiel about how Finn was responsible for Steffy’s addiction, and Hope openly questioned that, saying that Finn stopped prescribing the pills, and still Steffy managed to get illegal pills.

Liam went on, blustering that Finn’s feelings for Steffy clouded his judgment, and that there may be other lines that Finn is willing to cross. Hope insisted that Finn wasn’t a threat. “So, you support this?” Liam asked.

“I’m giving Steffy a chance to make up her own mind,” Hope said. Liam launched into his tirade again, and Hope said, “Stop. You need to let her live her own life, and this is making me wonder if maybe there’s more.”

Liam asked what Hope meant, and Hope explained that this is new territory for all of them. Hope said that there was a possibility that Liam’s attitude toward Finn may stem from the fact that Liam’s jealous. Liam looked completely taken aback.

That was a great episode of B&B, and a great way to round out the week. Remember, you can count on CDL for all the latest soap spoilers and news, so be sure to stop by frequently. We’ve got you covered!

“I want what’s best for you and Kelly, and I want to make sure you know how special you are.” 💙 Who’s ready to see what’s next for #Sinn? 🙋‍♀️🙋‍♂️ #BoldandBeautiful pic.twitter.com/DNhfLLab31