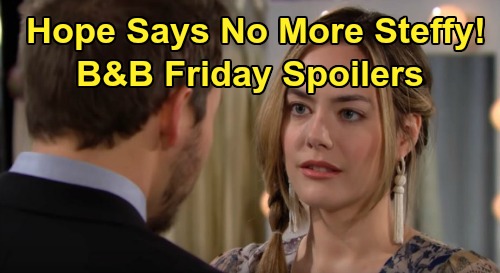 But according to The Bold and the Beautiful spoilers, Steffy will only take so much of Liam’s overprotective routine. It looks like Liam’s going to try to keep Finn away from Steffy by telling Steffy that he doesn’t want Finn around Kelly Spencer (Colette and Avalon Gray).

That’s probably going to irk Steffy, since it will be crossing into the territory of Liam trying to dictate who she can and can’t spend time with.

Steffy will show Liam that she’s still strong Steffy by standing up for herself when Liam demands that he doesn’t want Finn anywhere near Kelly.

Steffy will probably point out that she could easily demand that Liam keep Hope away from Kelly, since Hope has crossed what some people might consider to be “ethical lines” in the past. Whatever the case, Steffy’s going to give Liam an earful.

It looks like Steffy will probably refuse to keep Finn away from Kelly, stating that there’s no grounds on which to think that Finn is a danger to children.

Steffy would be wise to school Liam on how addiction works – that is, it’s a disease of secrecy and it was her responsibility to be honest and forthcoming with her doctor, which she wasn’t.

Steffy will likely take responsibility for her actions, noting that Liam just doesn’t want to put blame on her.

Well, it seems that after Liam and Steffy have it out, Liam will meet back up with Hope Spencer (Annika Noelle). As B&B viewers know, Hope has been pretty frustrated with Liam’s obsession over Steffy and Finn, and on Friday’s episode of B&B, Hope will call out Liam for being overprotective of Steffy.

Hope may even question exactly what’s going on with Liam, and she could accuse him of still having feelings for Steffy, and therefore deep jealousy of Finn.

The Bold and the Beautiful spoilers say that Liam will be stunned when Hope grills him about his fury over Finn. Liam will probably play the Kelly card, insisting that he’s just worried about his daughter, but Hope might call this out as sheer nonsense.

After all, there’s simply no evidence that Finn is a danger to anyone, let alone a child.

We’ll see how this all plays out, but we might see some ongoing friction between Liam and Hope over this. Hope will probably think that Liam should be focusing his attention on taking care of his family, rather than targeting Finn and struggling with letting Steffy go.

And Liam will probably argue that he IS trying to take care of family by protecting Kelly. We’ll see who proves victorious in this argument.

It sounds like a lot of B&B drama is heating up for Friday’s episode, so stay tuned! Remember, CDL is your go-to source for all the latest Bold and the Beautiful spoilers and news. And don’t forget to check out our daily episode recaps as well!