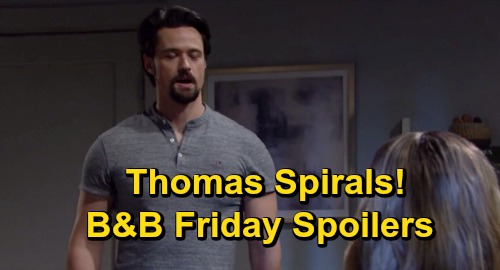 The Bold and the Beautiful spoilers recap for Friday, October 23, reveal that Thomas Forrester (Matthew Atkinson) reeled as he continued to hear the Hope Spencer (Annika Noelle) mannequin talking. “I’m not having this conversation.

You’re a mannequin,” Thomas said. “I should have left you at the office.” The mannequin asked Thomas to let him stay at the apartment.

Thomas told himself that the mannequin wasn’t alive, and the mannequin replied, “I’m alive if you say I am.” Thomas decided to put the mannequin back in the box and take it to Forrester Creations now, but the mannequin told Thomas that she wanted to stay, and she wondered why this was so hard for Thomas to believe.

Thomas told himself that he was hearing voices and he seemed really disturbed by the turn of events.

The mannequin told Thomas to stop denying things, and that she’s right there. “Don’t fight this, it’s me,” the mannequin said. “Let me stay here, where I belong.”

“Mr. Flip Flop?” the mannequin asked. “You think I want Liam when I have a man who shows me how much I mean to him?” Thomas then snapped out of it and said that the mannequin had to leave.

The mannequin pled with Thomas not to make her leave and to let her stay the night. Thomas looked stressed and very concerned about what was happening to him.

In the Forrester CEO office, Brooke Forrester (Katherine Kelly Lang) entered and talked with Hope. Hope seemed preoccupied, and she revealed a design sketch to Hope that Thomas had done.

Brooke loved it, but she wondered if it was for Hope For The Future (HFTF). Hope revealed that Thomas wanted to work on the HFTF team with Zende Forrester Dominguez (Delon de Metz).

Brooke worried that maybe Thomas just wanted to be closer to Hope, and Hope said that with Zende in the mix, it would all feel safer. Hope thought that Thomas was now on the right path, but Brooke thought there was a chance that Thomas was still obsessed with Hope.

Hope promised not to forget all the horrible things that Thomas had done, and Brooke pointed out that Thomas was psychologically unbalanced and may never recover.

In the Forrester design office, Zende was sketching a design with a model that looked just like Zoe Buckingham (Kiara Barnes) when Julius Avant (Obba Babbatundé) entered.

Julius noted that Zende left Paris fast, and Zende said that he knew that Julius had trusted him to care for Nicole Avant (Reign Edwards). Julius was understanding, and he said that he’d always think of Zende as a son. Zende was touched.

Julius could tell that something was on Zende’s mind, and he offered to be a sounding board and offer advice. Zende thought that perhaps some topics weren’t best for them to discuss, and Julius realized that Zende might be dating again.

Zende said no, but that there was a woman at Forrester Creations, and that it was complicated because there was someone else involved.

Julius suggested that Zende move on with his life, complicated or not, and he pointed out that this other person would get hurt eventually. Julius thought that Zende owed it to himself and the woman he’s interested in to find out if there’s something there. Zende thanked Julius for his advice and Julius took off.

Zende smiled to himself, and remembering that Zoe was off with Carter Walton (Lawrence Saint-Victor), he sent a text to Zoe saying: “Don’t move too fast with Carter tonight! Make up an excuse and meet met at the office.

I’ll be waiting for you.” Zende then watched the video of Zoe singing and glanced in the direction of the door, hoping that Zoe would walk through soon.

At Carter’s loft, Carter told Zoe that he was looking forward to more nights like this, and she wondered why Carter was so good to her. Carter reiterated how much Zoe meant to him, and Zoe said that she just didn’t have much luck with men.

But Zoe said that when she’s with Carter, things feel different and that she doesn’t know what to think.

Carter said that what was important was how Zoe felt, and that he knew exactly how he felt about her. “I have completely fallen in love with you,” Carter said, and he noted that he wasn’t Zoe’s father, or Xander Avant (Adain Bradley), or Thomas, and that he wouldn’t abandon Zoe.

Carter said they had the rest of their lives and it could all start tonight. Carter and Zoe kissed passionately.

That was a terrific episode of the Bold and the Beautiful, and it was a great way to round out the week! We’ll be sure to let you know about any spoiler and news developments over the weekend, so stick with CDL. We’ve got all the latest updates just for you.