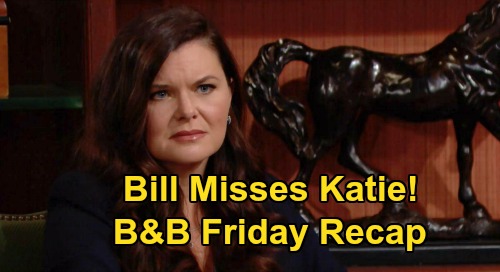 Eric urged Ridge not to let his hate for Bill break his family apart, and Ridge relayed how Bill showed up at the Forrester mansion right after Quinn Forrester (Rena Sofer) brought him up. Ridge said that he hated it that Brooke Logan (Katherine Kelly Lang) couldn’t see what he saw.

Meanwhile, over at Spencer Publications, Bill fumed to Wyatt Spencer (Darin Brooks) about Quinn. Bill told Wyatt all about how Quinn dragged him into her plan to stick a knife into Brooke’s heart.

Wyatt pointed out that Bill really caused all of these problems himself, despite Quinn’s actions. Bill got agitated and admitted that he screwed up, but he said that he wasn’t prepared to lose his family over it. Wyatt said that Bill should stop running to Brooke’s rescue.

Bill admitted that he was confused over the whole situation with his feelings for Brooke and Katie Logan (Heather Tom). Wyatt said that Bill got himself into this situation, and Bill said that he loved both Brooke and Katie. But Bill noted that nobody had had a more positive and profound impact on him than Katie.

In the Forrester CEO office, Donna Logan (Jennifer Gareis) unpacked takeout for lunch, but Brooke said that she wasn’t hungry. Brook lamented about how Quinn showed up at the Forrester mansion and interrupted her conversation with Ridge.

Katie suddenly showed up and realized that Donna had arranged for both herself and Brooke to be there. Donna said that Brooke and Katie needed to sit down and talk through their issues.

Brooke said that she’d apologize as many times as it took, and that she didn’t want to take Bill from Katie. Katie said that she believed Brooke, but that the bottom line was that Bill was in love with Brooke. Brooke urged Katie to give Bill another chance, but Katie said that Brooke didn’t get to have an opinion on that.

Brooke then lamented again about she and Ridge almost had a breakthrough earlier, but Quinn showed up. Brooke told Katie that Bill showed up, and Katie was exasperated about that. Brooke said that Quinn seemed to love every minute of it, and that there seemed to be some scheming going on.

Quinn suggested that Shauna ask Ridge for a wedding ceremony in front of her family and friends. Shauna balked, but Quinn said that Brooke didn’t respect the Vegas wedding.

Shauna didn’t like the idea and said there should be no more tricks because what she has with Ridge is too important. Quinn urged Shauna to tell Ridge that she wanted a wedding.

Suddenly, Ridge walked through the door, and Quinn abruptly hung up on Shauna. Quinn told Ridge that she and Shauna had just been talking about him.

Quinn said that Shauna was nervous to ask, but that Ridge could give her this gift…so that the whole world could see Mr. and Mrs. Ridge Forrester.

There’s a lot of B&B drama heating up, so stay tuned! Stick with the CBS soap and don’t forget to check CDL frequently so you don’t miss any of the latest Bold and the Beautiful spoilers, daily episode recaps, and news. We’ve got you covered!