The Bold and the Beautiful Spoilers: Hope A Better Mom Than Steffy? – Addiction Has Kelly Consequences 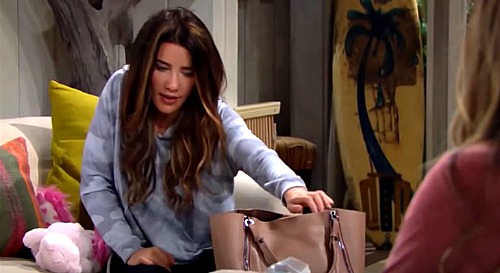 The Bold and the Beautiful spoilers document that this highly subjective topic, who between Steffy and Hope is the better mom, may create dramatic reactions. Yes, that is what daytime drama intends to do. Steffy Forrester (Jacqueline MacInnes Wood) had Liam’s first-born child, Kelly Spencer (Avalon and Colette Gray).

Facts were presented in the above paragraph, with it being understood that people in this fictional version of Los Angeles, California, will inject their own opinions into the truth, based on whether they believe Steffy, or Hope is the better mom. Such is life in late summer, as emotions overcome logic and scorch the earth.

Devoted B&B fans don’t need a primer. Yet, newer fans might benefit from a modest soapy briefing. So, here it goes.

Liam Spencer (Scott Clifton) has families with two women, Steffy and Hope. His personality appears to be better suited to Hope, as both character’s are heavily influenced by emotion. Steffy is generally the more logical, concrete thinker.

Liam and Hope are idealists. Steffy is a realist.

Of course all assessments can be challenged, as daytime life is merely a point of view. And all viewer and reader’s takes count.

Steffy has been married to Liam three times, like Hope. Steffy married Liam first and had his first-born child.

However, Hope has two children, which includes the responsibility she accepted in adopting the child of the late Caroline Spencer (Linsey Godfrey). Douglas’ father wasn’t stable, which sparked Hope to become this boy’s second mother.

Hope is married to Liam now, with Steffy realizing in the recent past that Steam wasn’t going to revive. Liam is committed to Hope and the family they’ve created, but he’s fully maintained his commitment to Kelly and still cares about Steffy, as the mother of one of his children.

Bold And The Beautiful Spoilers – Hope a a Better Than Steffy?

In the developing storyline, Steffy appears to be on the verge of moving off-course. She appears to be heading into a pain-killer addiction storyline, which would put her ability to care for Kelly in jeopardy. Hope’s pure desire is to help during this time, not assert that she’s the better mother.

Steffy’s inner strength has caused her to resist a period of extended medication because she wants her mind to be clear. But the intensity of the pain caused by her accident, which was arguably reckless on Steffy’s part for choosing that method of transportation, has forced Wood’s character to admit another prescription is needed.

It can be rightly stated that both ladies are good mothers, with comparisons between them (or any two parents in LA) appearing to reflect which person opinionated B&B characters feel are similar to themselves. But this is soap and so the debate rages, with passionate reactions anticipated.