The Bold and the Beautiful Spoilers: Hope and Steffy Both Pregnant by Liam – Two More Babies On The Way? 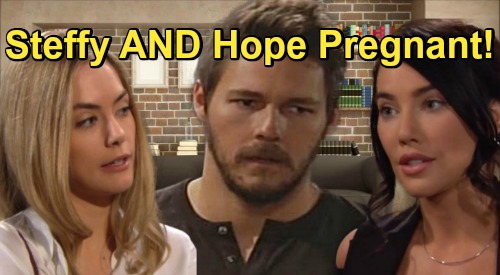 The Bold and the Beautiful spoilers tease that Liam Spencer (Scott Clifton) is the father of two young girls that he had with Steffy Forrester (Jacqueline MacInnes Wood) and Hope Spencer (Annika Noelle) in that order.

Current circumstances present the realistic possibility that he could become the father of a second child with Steffy following their night of drinking and sleeping together.

Imagine how the projected arc will be upended if Hope also learns that she’s going to have another child from Liam as well. Might B&B write another pair of pregnancy storylines involving Liam, rather than just one?

Bold And The Beautiful Spoilers – Two Offspring As Of The Moment

Liam actually is helping to care for a third child, Douglas Forrester (Henry Samiri). His two biological children, Kelly Spencer (Avalon and Colette Gray) and Beth Spencer (Madeline Valdez and River Davidson), have been doing well. Majority kudos to their mothers in that regard.

While Liam is an attentive father, he knows and is grateful to Steffy and Hope for being with his daughters full-time. To their credit, Steffy and Hope also made this family arrangement work. Yes, there have been some rough emotional issues to deal with, but they’ve done it.

Bold And The Beautiful Spoilers – Making A Mistake With Steffy Forrester

Regarding the developing dilemma, both Liam and Steffy are equally responsible. One, the other, or both, should have stopped drinking before they became inebriated. But that didn’t happen and the claimed scenario at Thomas Forrester’s (Matthew Atkinson) apartment served as the provocation for the cliff house incident.

The day-after analysis offered by Liam and Steffy compartmentalized what happened, as though it was simply another part of Steam’s never-ending connection. But what happened could be written toward Steffy receiving a positive pregnancy test result. Teasers showing her with a doctor imply that potential outcome.

Bold And The Beautiful Spoilers – Liam & Hope Fine Until Now

Liam and Hope have been blissfully enjoying their remarriage and full family life with the two children (Beth And Douglas) in the cabin. Having Hope also be pregnant when Steffy is, assuming Wood’s character will be, would double the drama.

It would also play off the time frames of when Liam’s two daughters were born, though Kelly may have been modestly SORAS’d (soap opera rapid aging syndrome) this year.