The Bold and the Beautiful Spoilers: Is Katie’s Future With Ridge – Finished With Bill, Needs a New Man? 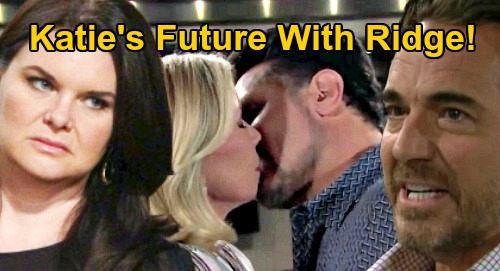 The Bold and the Beautiful spoilers document that Katie Logan (Heather Tom) has been married to Ridge Forrester (Thorsten Kaye) twice. They have a son, Will Spencer (Finnegan George), who is the center of Katie’s life and should have been Bill Spencer’s (Don Diamont) top priority. But he wasn’t and Bill betrayed Katie’s trust on many occasions, as the fans know.

Most recently, meaning this past spring, Katie and Ridge were mortified when they were forced to watch Brooke Logan (Katherine Kelly Lang) and Bill kissing on screen like they were high school sweethearts. That broke Bridge and Batie, with a couple’s remix then becoming plausible.

Bold And The Beautiful Spoilers – Does Katie Logan Need A Man?

Katie is on her own right now. She doesn’t want Bill back because he’s been unable to control his impulses where Brooke is concerned.

Thorne Forrester (Ingo Rademacher), Katie’s last husband, is out of the country and isn’t known to be coming back. Wyatt Spencer (Darin Brooks) is deeply in love with Flo Fulton (Katrina Bowden). While Watie was totally endearing, it’s not likely to revive anytime soon.

Fans who have watched this show for awhile recall that Katie and Ridge were a couple at one time. Call them Kidge, Kage, Ridgie, Ratie or whatever one likes in retrospect, or possibly in the future?

Bold And The Beautiful Spoilers – Shauna & Ridge End Before Too Long

It seems as though the delightful Denise Richards (Shauna Fulton), who’s been a terrific edition to the cast, will remain married to Ridge in the near term. A Shidge break before Thanksgiving, or even Christmas would seen unusual.

But let’s assume that Ridge doesn’t fully commit to Shauna, as she’s not yet someone who he loves deeply. Well, in that scenario, it’s possible that he could lean on Katie, as their lives were totally disrupted by the actions of their kissing soul mates.

Bold And The Beautiful Spoilers – Do Bill and Katie Really Have a Chance?

Bill hasn’t given up on Katie, but he seems to believe that the odds of him reconciling with her are very slim. Bill’s renewed his hope that some type of relationship with Brooke can be revived. But he’s waiting for the dress-maker to be blocked by Lang’s character before proceeding any further.

As for Batie, it does seem like B&B is allowing this likable pairing to go by the wayside. If that’s the case, then Katie will either remain focused on Will, like she always has been, and continue working consistently at Forrester Creations.

Due to her exceptional nature, it’s likely that some other man, possibly including Ridge, will fill the romantic void in her life, or she’ll pursue some new guy that’s not like Bill.