The Bold and the Beautiful Spoilers: Is Rena Sofer Staying On B&B? – Quinn Down and Out In LA 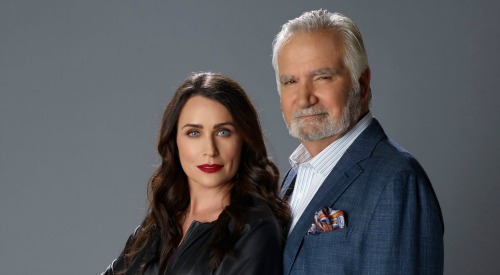 The Bold and the Beautiful spoilers document that Quinn Fuller Forrester (Rena Sofer) has done herself in. Eric Forrester (John McCook) has reacted like any rational person would and his response could lead to a quick divorce.

It could be that there is little plot left for Sofer to play. Considering the fluid nature of this genre, is it possible that the great actor is leaving B&B? Here’s hoping the answer to this question is a hard no.

Brooke Logan (Katherine Kelly Lang) repeatedly implored Eric to see what was right in front of him. But he was blinded by love. That’s a natural human coping mechanism, where one person chooses to overlook certain aspects of a persona in order maintain the status quo.

In this specific case, Eric was choosing to believe that Quinn changed. The recent retrospective, which had McCook’s character thinking about Queric’s better days, appears to foreshadow end-times for this couple.

Whether Quinn would actually return to the desert, assuming Eric files for and achieves divorce, is a point to consider.

Eric was rationalizing Quinn’s behavior at the intended Bridge reunion party. He later forgave her for reasons that were directly tied to his feelings, rather than a balance with logic.

But Quinn’s now revealed and admitted attack on Brooke was also an attack on Ridge Forrester (Thorsten Kaye) and on Eric himself. Sofer’s character was unable to see that her plan to split Bridge and have Ridge marry Shauna Fulton (Denise Richards) was a Forrester family betrayal and a violation of her marriage vows.

Eric’s mention of Quinn having crossed a line was coupled with a question he asked. McCook’s character, who Quinn undoubtedly loves, wondered aloud if Quinn had ever actually changed from her woebegone ways?

Bold And The Beautiful Spoilers – Rena Sofer Is Outstanding

News about cast changes can be kept tight within the daytime world. Encouragingly, there is no known information available that suggests Sofer won’t continue working at B&B.

Sofer joined the cast of B&B in 2013. She’s since developed what has become a main character on this iconic show. That’s a major accomplishment by an accomplished actor.

Her only daytime Emmy nomination came in 1995, when she won in the Outstanding Supporting Actress in a Drama Category for her portrayal of Lois Ashton Cerullo on General Hospital.

Sofer should surely present a submission for next year’s Emmy consideration. Her textured efforts remain consistently outstanding and will hopefully be enjoyed on B&B for many years to come.