BY Heather Hughes on May 13, 2020 | Comments: Leave Comments
Related : Soap Opera, Spoiler, Television, The Bold and the Beautiful 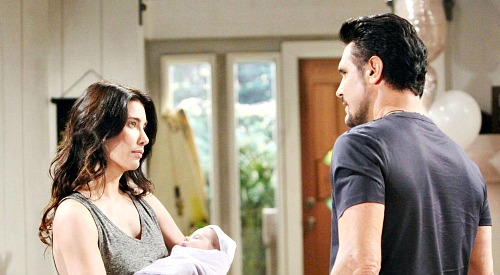 The Bold and the Beautiful (B&B) spoilers reveal that Jacqueline MacInnes Wood (Steffy Forrester) recently took the time to reflect on her time at the CBS soap. Wood’s been part of many storylines as Steffy, but does she have a favorite? In an interview with Soap Opera Digest, Wood was asked about her favorite storyline she’s ever done – and her answer was surprising!

It turns out Wood’s favorite story wasn’t a romantic one or perhaps one that highlighted Steffy’s anguish. Those are usually good opportunities for an actress to show her stuff, but Wood had a different story in mind as her fave. Although Wood’s offered up other picks in the past, her current favorite involved doing some business with Bill Spencer (Don Diamont)!

“Getting the Forrester Creations company shares back from Bill,” Wood said in response to this fave story question. Since Wood’s clearly a fan of business battles and “Dollar Bill,” maybe The Bold and the Beautiful writers should cook up another story involving those elements.

There was talk about Thomas revving up his Logan elimination plot and getting some real pushback from Bill.

Of course, story plans can change on The Bold and the Beautiful, but there’s a chance that’ll still play out on B&B eventually. That sounds like something Steffy could get involved in. Steffy’s not a huge fan of her brother these days due to his manipulative behavior, and she probably wouldn’t agree with Thomas anti-Logan plotting either.

That could put Steffy on Bill’s side, so it’d be fun to see them on the same team. Then again, Steffy might object to Bill butting in on their family business.

Perhaps Steffy could argue that Bill needs to worry about Spencer Publications and let the Forresters worry about Forrester Creations – even if she doesn’t necessarily agree Thomas’ vision. Watching Bill and Steffy spar would be pretty fun, too.

Bottom line, it’d be exciting to see Steffy and Bill in a new storyline together. Wood and Don Diamont clearly enjoy working together, so there are plenty of ways to make this happen. B&B could go for reignited sparks, but that’s not the only tactic to keep Bill and Steffy interacting. Some business battles and blowups would work as well.

Would you like to see Steffy and Bill in another story together, even if they’re not paired romantically? Do you want to see Bill and Steffy team up or face off?