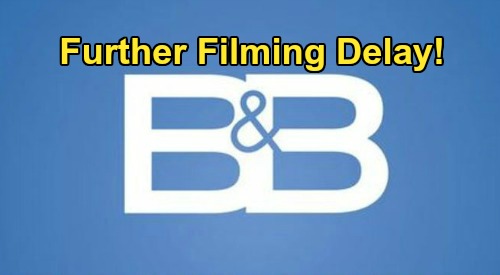 The Bold and the Beautiful (B&B) spoilers news update reveals that there’s been another delay in the CBS soap’s return to production. The show officially got back to filming on Wednesday, June 17, but they only made it a day before their testing protocol had to be expanded. B&B rescheduled filming for Tuesday, June 23, but that plan didn’t pan out either.

The Bold and the Beautiful now intends to resume shooting on Wednesday, June 24. A spokesperson offered a statement about the testing hurdles B&B’s facing.

“The Health Department had some additional questions about the lab TV City provided The Bold and the Beautiful with last week, which produced several false positives,” this series spokesperson said.

However, the spokesperson also wanted to stress that there haven’t been any positive COVID-19 test results. The false ones were simply a mistake that the show worked to resolve by changing labs. B&B producer Bell-Phillip Television confirmed that the situation was handled, so they expect no more problems.

At this point, it’s just a matter of supplying all the appropriate details. “We have not had, nor do we have, any positive COVID-19 cases and are not ‘shut down’, but we needed an additional day to provide them with requested information,” the spokesperson insisted.

Additional sources suggest that saliva tests led to the false positives and all the confusion, so The Bold and the Beautiful swapped those for more accurate nasal swabs.

They’re not as pleasant for the cast and crew, but these tests should lead to reliable results – and those are certainly necessary if the show’s going to move forward as planned. Everyone at B&B has to stay safe!

We’ll deliver updates as other B&B news comes in. If the show can truly get the show back on track starting June 24, new episodes will hopefully hit the screen in July.