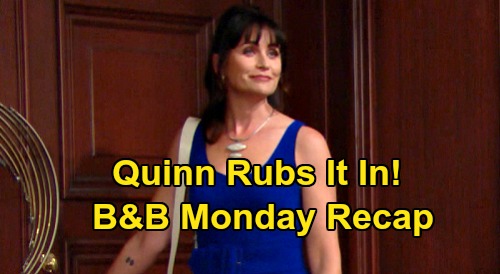 The Bold and the Beautiful spoilers recap for Monday, August 17, reveal that Ridge Forrester (Thorsten Kaye) visited with Steffy Forrester (Jacqueline MacInnes Wood) at her home. Kelly Spencer (Colette and Avalon Gray) was down for a nap, and Steffy sat down to talk with her dad, wincing in pain as she did.

Steffy quickly realized something wasn’t right with Ridge, and after he danced around the subject for a while, he revealed that his marriage to Brooke Logan (Katherine Kelly Lang) was over.

Steffy sensed there was more to the story, and Ridge slowly told Steffy about how he went to Las Vegas with Shauna Fulton Forrester (Denise Richards) and now Shauna was back in Los Angeles saying that she’s his wife. Steffy said that Ridge shouldn’t just take Shauna’s word for it, but Ridge lamented about how there was a marriage certificate and wedding photos.

Ridge then told Steffy all about how he had texted Carter Walton (Lawrence Saint-Victor) during his drunken spree and that he divorced Brooke, so his marriage to Shauna was legal. Steffy thought that Ridge could “fix” this, but Ridge blathered on about how everything WAS fixed and that he was going to get back with Brooke, but now that was blown to smithereens.

Steffy suggested that Ridge lean on his family for support, and as she did, she winced in pain again. “Why don’t you take your pain meds?” Ridge demanded.

Steffy explained that she was all out of pain meds and that the doctor stepped her down to over-the-counter meds. Steffy then pivoted the conversation back to Shauna, asking if Shauna knew that the marriage was a mistake.

Ridge didn’t exactly answer that question, and Steffy pointed out that Ridge still cared about Brooke, but that Shauna probably really wants to be with him. Ridge looked miserable.

Meanwhile, over at the Forrester mansion, Shauna thanked Quinn Forrester (Rena Sofer) for letting her stay at the mansion overnight. Shauna said she was feeling more positive today, and Quinn was glad.

Shauna gushed about her marriage to Ridge being a dream come true, and Quinn went on about how Ridge was so much better off with Shauna than with Brooke. “It’s amazing what we can accomplish,” Quinn said, and together she and Shauna rehashed how Quinn had instructed Shauna to send the text to Carter pretending to be Ridge. Quinn and Shauna vowed to keep the secret forever.

Later, Shauna stood alone in the living room and looked at her marriage certificate to Ridge, as she flashed back to their wedding ceremony. Over in the Forrester CEO office, Brooke was working when Eric Forrester (John McCook) entered looking for Ridge.

Eric told Brooke that he was sorry for what happened, and that he couldn’t believe that Shauna and Ridge were married.

Brooke grumped about Ridge’s decision to divorce her and marry Shauna, and Eric offered support. “The man I love wouldn’t do this,” Brooke complained, and she said that it was over.

Eric defended Ridge, saying that Ridge didn’t remember filing the papers. Eric lamented about how Shauna was Quinn’s best friend and that he’s trying to be respectful of everyone.

Brooke made some catty remarks about Quinn, then said that Quinn was probably thrilled with how everything turned out. Brooke said that she had been warning Ridge about Shauna, and now this happened. Eric maintained that Brooke was the woman that Ridge loved and that he wanted to be with…no matter what happened in Las Vegas.

Later, after Eric left, Quinn walked in looking for Eric, then took a jab at Brooke, saying that she wouldn’t mention Brooke’s husband. Brooke asked Quinn if she was seeing if her plan was working, and the women traded insults for a while.

Brooke openly wondered how Shauna managed to convince Ridge to marry her. Quinn gushed that Shauna would be a great wife to Ridge…and that she’d be faithful and devoted in a way that Brooke never could be.

Brooke fired back that it was a sham marriage, and Quinn insisted that Brooke’s grand love affair with Ridge was finally over. “Ridge is moving on with Shauna, and there’s nothing you can do about it,” Quinn mused happily.

That was a great episode of B&B, and there’s plenty more coming this week, so stay tuned! Stick with the CBS soap and don’t forget to check CDL frequently for the latest Bold and the Beautiful updates. We’ve got you covered with B&B spoilers and news!