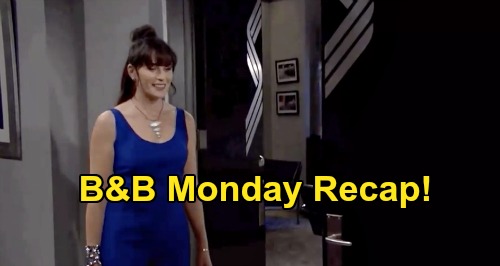 The Bold and the Beautiful spoilers recap for Monday, August 24, reveal that Carter Walton (Lawrence Saint-Victor) was in the Forrester CEO office changing clothes when Zoe Buckingham (Kiara Barnes) entered the office and took in the view. “Sorry, I’m staring,” Zoe said. “Well, I had my eye on you too,” Carter replied.

Carter and Zoe sat and talked, and Carter wondered how Zoe was doing after the fallout from her disastrous wedding to Thomas Forrester (Matthew Atkinson).

Zoe said that it had been good to go back to work, and that she really had cared for Thomas, which is what made the whole thing so hard for her. Zoe told Carter that Thomas had apologized to her, and that he’d taken responsibility for what happened.

Carter raised his eyebrows as Zoe said that Thomas even asked if they could “try” again, but Zoe said that there was just no way.

Carter said everything that happened was on Thomas, not Zoe, and Carter said that while Zoe was with Thomas, he had been respectful and didn’t push. But now, Carter thought that perhaps Zoe would like to go out to dinner.

Zoe seemed into it, and she thanked Carter for being truly concerned about her. Carter and Zoe smiled at each other happily.

Bill balked, saying that he had a family with Katie Logan (Heather Tom), and Quinn pointed out that Bill and Katie weren’t anywhere close to being back together. Quinn kept pressing Bill to get over to see Brooke before Ridge Forrester (Thorsten Kaye) got to her first.

Bill was clearly moved by what Quinn was saying, and he poured himself a drink while Quinn went on. Bill noted that Quinn would get what she wanted if he went to Brooke, since Quinn wanted Ridge to be with Shauna Fulton Forrester (Denise Richards).

Quinn admitted it, and she said that they could both get what they want, but that Bill couldn’t hesitate. Quinn left, and Bill left shortly afterwards. Quinn was thrilled as she watched in the wings as Bill left.

At the Forrester mansion, Shauna was waiting for Quinn in the living room when Eric Forrester (John McCook) came in. Eric apologized to Shauna if anything he said earlier seemed harsh. Shauna replied graciously, and with understanding that he wants Brooke and Ridge to be together.

Eric noted that Quinn was very fond of Shauna and very protective of her, and that there was nothing Quinn wouldn’t do for Shauna. “But when Ridge filed those divorce papers, he didn’t know what he was doing,” Eric insisted.

Later, Shauna was alone in the Forrester living room when Quinn returned from Spencer Publications. Quinn reported that she just set something in motion that could end Brooke and Ridge forever.

Quinn then told Shauna all about her trip to see Bill, and about how “Brooke’s stallion went galloping off to her rescue.” Quinn insisted that Bill still wanted Brooke and that she had pushed all the right buttons. Quinn wondered if Bill got to Brooke’s place in time and if it would be enough to keep Brooke and Ridge apart forever.

At Brooke’s place, Brooke and Ridge continued to talk about their reunion. Ridge noted that he had done something stupid in response to seeing Brooke kissing Bill. Brooke told Ridge to put Bill out of his mind, and that Bill was certainly out of her mind.

Brooke wondered if he had a plan if Shauna fought the annulment, but Ridge didn’t think that Shauna would do that. Brooke scoffed, saying that Ridge thought better of Shauna than she has ever deserved.

Brooke pointed out that Shauna remembered everything about their wedding while Ridge remembered nothing, but Ridge turned the discussion back to Bill, asking if Bill was going to be a problem.

Brooke reassured Ridge again that Bill was no longer a problem. Ridge said not to worry, that he’d go take care of the annulment papers. After declaring their love for each other, Ridge took off.

Brooke walked away and in the direction of the kitchen, and a few moments later, Ridge walked back in the front door with a white flower. Ridge walked up the stairs into the bedroom, where he left the flower and a note for Brooke.

Back downstairs, Brooke returned with some tea, and Bill walked in the front door. Bill started in on how Ridge had run off to Vegas like a big baby and married Shauna.

Bill went on about Ridge’s lack of commitment to Brooke, and about how Brooke should be glad that Bill is out of her life. “And you can move on with a man who will always love and appreciate you,” Bill said.

Brooke told Bill that he didn’t know what he was saying. After some bickering, Brooke defended Ridge saying that Ridge didn’t remember any of his wedding to Shauna. “Brooke, he filed divorce papers,” Bill said.

Brooke said that Ridge was on his way to see Shauna and give her the annulment papers, and that both she and Ridge regret what they did.

Up in Brooke’s bedroom, Ridge heard voices coming from downstairs. Bill and Brooke kept talking, with Bill complaining that Ridge always pulls her back into a dysfunctional cycle.

Bill said he was there for Brooke, just like at the cabin when they shared that passionate kiss, and that he hadn’t been able to stop thinking about it. “It reawakened something in me,” Bill said. “The truth is I love you, Brooke.”

“A part of me will always love you. I will love you for the rest of my life.” Ridge had heard enough and took off back into the upstairs hallway.

Brooke continued. “But the man that I truly love and want to spend the rest of my life with is Ridge,” Brooke insisted. Ridge didn’t hear this part of Brooke’s statement, and he stood upstairs in the hallway horrified by what he heard as Brooke’s words about Bill reverberated in his head.

That was a terrific episode of B&B, and the drama will continue tomorrow, so stay tuned to the show! Remember, we’ve got you covered with all the hot soap news, sizzling spoilers, and all the updates so you can stay current with what to expect on B&B. Stick with CDL!