BY Heather Hughes on February 3, 2020 | Comments: one comment
Related : Soap Opera, Spoiler, Television, The Bold and the Beautiful 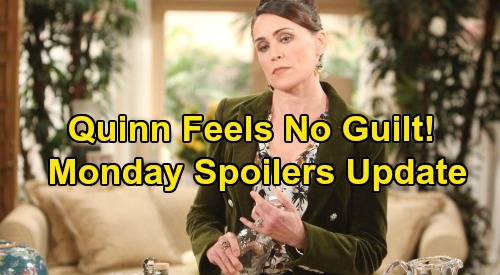 The Bold and the Beautiful (B&B) spoilers update for Monday, February 3, teases that Wyatt Spencer (Darin Brooks) will remain conflicted about his recent decision. He chose to follow his heart back to “Flo” Fulton (Katrina Bowden), but he hates the toll this is taking on Sally Spectra (Courtney Hope). Wyatt has burned Sally on more than one occasion, so the guilt will keep eating away at him.

The Bold and the Beautiful spoilers say Wyatt will open up about his dilemma. He’ll try to make peace with the fact that choosing Flo means Sally suffers, but that won’t be easy when he cares so much.

Liam will understand what Wyatt’s going through since he bounces from Steffy Forrester (Jacqueline MacInnes Wood) and Hope Logan (Annika Noelle) so often. He certainly loves them both, so he’ll get how hard this must be for Wyatt. Liam will be supportive and kind as he offers Wyatt some useful guidance.

However, Wyatt will admit Liam’s part of the problem. He’ll think back to Sally accidentally calling him by Liam’s name and how that was the start of things heading downhill.

Liam will remind Wyatt that it was a simple mistake, but Wyatt will think it was a bit more than that. It helped him see that he had to step out of his brother’s shadow.

Flo is a love interest that Liam’s never been with, so perhaps that affected Wyatt’s decision – even on a subconscious level. At the moment, Wyatt can trust that Flo wants him and only him. There’s also plenty of history between them and that can be a powerful draw.

As much as Wyatt cares about Sally, he feels his future lies with Flo.

Liam will think it’s good for Wyatt to be honest with himself about who he is and what he wants. He’ll end his chat with Wyatt on a heartwarming note, so expect some nice scenes for these two.

In the meantime, Quinn Forrester (Rena Sofer) will hope her dirty move pays off. Brooke Forrester (Katherine Kelly Lang) drove Quinn to her breaking point, so Quinn decided to dump vodka in her foe’s juice bottle.

That’s a problem since Brooke’s battled alcoholism in the past and could easily get hooked again. Despite how low Quinn is sinking, it doesn’t look like she’ll battle any guilt whatsoever.

Quinn’s so enraged that all she can think about is winning. She’ll hope that Brooke’s taste of forbidden booze will lead her down a path of destruction.