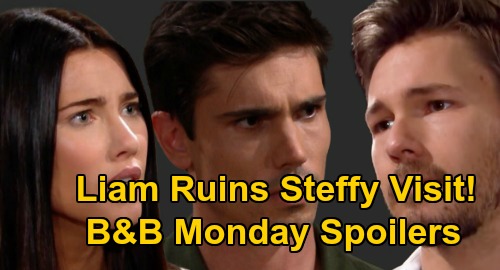 The Bold and the Beautiful spoilers for Monday, October 12, tease that Liam Spencer (Scott Clifton) is going to get an unpleasant surprise. It seems that Liam will have the opportunity to visit with Steffy Forrester (Jacqueline MacInnes Wood) at her treatment facility.

It will be B&B viewers’ first opportunity to see how Steffy is doing since she admitted that he was addicted to opioid painkillers in that dramatic scene at the cliff house.

According to B&B spoilers, Liam will hear all about how Steffy is doing, and the visit will be going very well as Steffy tells Liam that she is putting forth all her efforts so she can get better for Kelly Spencer (Colette and Avalon Gray).

That will be music to Liam’s ears, and he’ll be thrilled for Steffy, but then something will happen that will kill the mood as far as Liam is concerned.

John “Finn” Finnegan (Tanner Novlan) will show up to visit with Steffy, and Liam won’t be happy about that. Liam will apparently be even more disheartened by Steffy’s reaction to Finn being there.

It looks like Steffy will perk up and be thrilled to see Finn, and the feeling will be mutual. Liam won’t like it, and according to B&B spoilers, his strong dislike for Finn will become quite obvious.

Of course, Liam is probably holding onto some feelings about Finn not recognizing the signs of Steffy’s addiction earlier, but there’s definitely going to be a jealousy aspect to this situation.

Liam will probably start to realize that Steffy is going to move on romantically, and he’ll be faced with the fact that Finn could be a presence in Kelly’s life going forward, too. That’s going to be a tough realization for Liam, and it’s going to manifest in strong disdain for Finn.

Meanwhile, on the new episode of B&B on Monday, October 12, it looks like we’ll also see an undercurrent of drama over at Forrester Creations, as Zende Forrester Dominguez (Delon de Metz) makes his presence known.

B&B viewers will remember that Zende is not only a talented photographer, but he’s also a serious fashion designer, and his return to Los Angeles will put him in direct competition with Thomas Forrester (Matthew Atkinson).

On Monday’s episode, it seems that Hope Spencer (Annika Noelle) will reconnect with Zende, and Thomas will be present to witness the exchange.

As B&B viewers know, Thomas recently daydreamed about his past with Hope, so it seems that he still wants her on some level, even though he knows that she’s with Liam now. Still, Thomas is probably hoping to work with Hope, perhaps on her Hope For The Future line going forward.

Well, B&B spoilers say that Thomas is going to be seriously put off as Hope offers Zende something that Thomas wants, and we can imagine that this could be a chance to be lead designer on Hope For The Future.

Whatever Hope ends up offering Zende, Thomas isn’t going to be thrilled about it, and B&B spoilers indicate that it might ignite a rivalry between Zende and Thomas going forward.

Who knows – a Thomas/Zende rivalry could bring great things for Forrester Creations, as both men are young and up-and-coming designers in their own rights.

A little competition could be healthy for them, but we have to remember that Thomas tends to get carried away, especially where Hope’s concerned, so this could end up being more contentious than healthy!

Monday’s episode of B&B is going to be must-see, so be sure to tune in! Stick with the CBS soap and remember to keep CDL at the ready so you don’t miss any of the latest Bold and the Beautiful spoilers, daily episode recaps, or news.