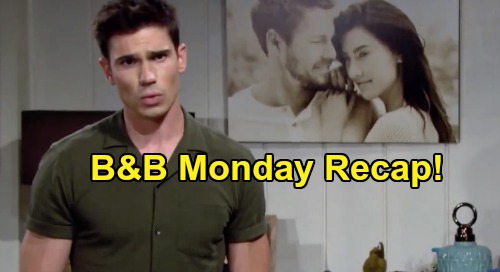 Liam said that he had a choice to make, and Bill interjected that Liam chose his family with Hope Spencer (Annika Noelle). Liam lamented that this all meant that Steffy Forrester (Jacqueline MacInnes Wood) was alone.

Bill then quipped that Steffy wasn’t alone – after all, she had that pig picture of herself and Liam in the living room. Bill thought that it was probably time for Steffy to take the picture down, and Liam agreed that Bill was probably right.

Bill thought that Liam should be admired for his commitment to both his families, but Liam said that Steffy deserved better than what he left her with. Liam thought that Steffy was on her own too much.

Bill warned Liam about indulging too much in guilt, and he thought that perhaps Liam was overthinking things. Bill said that Steffy would find someone new, and Liam pointed out that what Steffy absolutely doesn’t want is not having Kelly Spencer (Colette and Avalon Gray).

Hope walked in, and Liam asked how the drop-off went. Hope said that Steffy didn’t have Kelly back yet, and Liam immediately got concerned.

Hope explained about not dropping Kelly off, while Liam paced uncomfortably. Hope said that Steffy’s reaction was pretty intense, and Liam thought that made sense since Steffy missed her daughter.

Bill interjected that it was a conundrum, because Steffy needed time to heal yet she wanted to be with Kelly, which was difficult for her to do right now.

Liam lamented that Steffy might feel like they’re taking advantage of her, and Hope mentioned that Steffy’s doctor showed up at the house as she was leaving. Bill immediately knew what that was about.

“This is the doctor from the hospital?” Bill asked. “The young, good-looking dude?” Liam insisted that the guy was a doctor, but Bill thought there was surely something more there.

Talk turned back to Kelly, and Bill thought that it was a blessing that Hope and Liam could spend this time with Kelly right now. After some more back and forth, Hope reiterated that she was glad that Steffy had a doctor who lived close by.

Later, after Bill stepped out for a meeting, Liam asked Hope what her gut was telling her about Steffy.

At the cliff house, John “Finn” Finnegan (Tanner Novlan) continued telling Steffy that he would help her heal both physically and emotionally. Steffy said that she was fine, and Finn said that he wasn’t surprised that she said that and that he could tell when she was pretending.

Steffy said that she wasn’t pretending; she just didn’t have her meds.

Finn asked whether she wanted the meds to heal her physical pain or the pain in her heart, and he noted the tension between Steffy and Hope earlier. Steffy said that there was a lot of history there, and Finn noted that the history also included Kelly’s father.

Steffy said she’d rather not get into it. Finn didn’t want to pry, but he did want to help, and he said that he had Steffy’s best interests at heart.

Finn assured Steffy that once her pain subsided, she’d have her health and her little girl. Steffy admitted that it was difficult to not be with Kelly, and Finn pointed out that these weren’t ordinary circumstances, and that Steffy was having difficulty managing her pain.

Finn asked if Kelly was happy when she spent time with Liam. Steffy said that Kelly had a blast, and Finn encouraged Steffy to appreciate that and take advantage of that time to heal.

Finn even mentioned the photo on the wall, and how losing that kind of love is a whole different level of pain. “Something tells me your desire for meds is not just to mitigate the physical pain,” Finn said.

Steffy replied, “Wow, you just say whatever you want.” Finn said that it was all based on his observation, and that Steffy’s strength would get her through this, not the meds.

Finn suggested that Steffy apply self-awareness about why she needs the meds, and he noted that emotional pain and drugs are a dangerous combination. Finn said he understood what it was like to have one’s life plan shattered, and that Steffy needed support and encouragement.

Finn urged Steffy to use her support system and to lean on him – he’s right there.

Eventually, Steffy said that Finn wasn’t entirely wrong, and that she was dealing with a lot. Steffy lamented about how she could get on her motorbike when she wanted to do the right thing for her daughter.

Finn assured Steffy that the accident didn’t make her a bad mother. Steffy went on about the pain and how it made being a single mom that much harder.

Be sure to stick with B&B so you don’t miss any of the action tomorrow! We’re here for you at CDL with all the latest Bold and the Beautiful daily episode recaps, news, and sizzling spoilers.