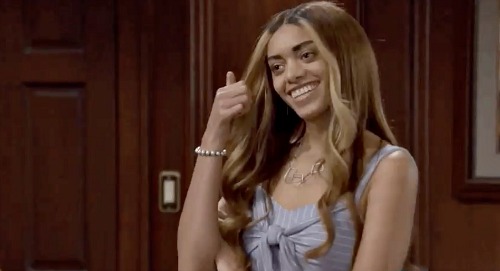 The Bold and the Beautiful spoilers document that Paris Buckingham (to be played by the recently announced cast member Diamond White) will upend Zoe Buckingham’s (Kiara Barnes) world when she appears in approximately early November.

Zoe has just started to right her life, which has been chaotic for approximately two years. The last thing she wants, or needs, is for another family member to create trouble. But that would make good soap on B&B.

As hardcore fans know, B&B continues to show Wayne Brady (Reese Buckingham) in its opening credits. Devoted viewers recall that Reese hasn’t been seen since 2019, because he was arrested and sent to prison.

The Beth Spencer (Madeline Valdez and River Davidson) kidnapping arc was epic, as fans who followed it can attest. The eventual climax revealed that the baby Reese stole from her mother and father (Hope Logan, Annika Noelle and Liam Spencer, Scott Clifton) at birth was Beth, not Phoebe Forrester, as her adoptive mother, Steffy Forrester (Jacqueline MacInnes Wood), came to call her.

Reese’s prison stay has occasionally been referenced by Zoe, with scant information about other parts of her personal life ever mentioned.

Zoe was outright wronged by Thomas Forrester (Matthew Atkinson) earlier this year. He formed a romantic relationship with her, as an initial ruse that was meant to convince Hope he’d moved on.

Thomas later convinced Zoe that he loved her and wanted to be married. The Thope wedding proved out as a disaster, with Thomas being baited into admitting that he still cared for Hope and wanted to reform their family, which included his son, Douglas Forrester (Henry Samiri), and Beth.

Carter Walton (Lawrence Saint-Victor) officiated the nearly completed Thope ceremony and has since proven to offer Zoe another chance at love. This potentially emerging couple is a stark contrast to what Thomas offered as part of his veiled attempt to be with Hope.

It’s always noteworthy when a soap builds out a family. The Reese write-in served to introduce the Zoe character. Now, in the near future, fans will learn that she has a sister.

Paris could become a rival for Carter’s heart. But a compelling pairing would see Paris and Thomas connect. That assumes that she will be intrigued by Atkinson’s character, or possibly shares his personality traits, with Zoe implications implied.