The Bold and the Beautiful Spoilers: Quinn Pushes Flo To Marry Wyatt ASAP – Wants Sally Out Of The Picture 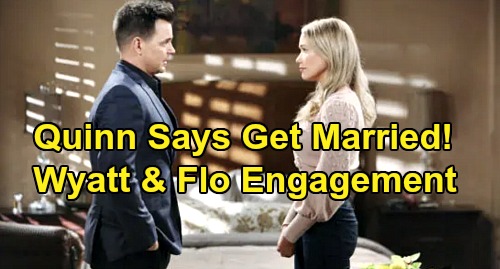 The Bold and the Beautiful (B&B) spoilers tease that Quinn Forrester (Rena Sofer) will soon be pleased as punch. As B&B viewers know, Quinn’s not shy when it comes to voicing her opinion about her son Wyatt Spencer’s (Darin Brooks) love life.

Quinn’s definitely a meddler, and she’s been perfectly clear with Wyatt for some time now that she’s not happy with Wyatt’s engagement to Sally Spectra (Courtney Hope).

Quinn simply doesn’t think that Sally is the right woman for Wyatt, but she knows who is…Flo Fulton (Katrina Bowden). Quinn has been decidedly on “team Flo” for a long time, and Wyatt knows it.

But it’s taken Wyatt some time to gravitate away from Sally and back toward Flo. Of course, he had to get over Flo’s lies and deception stemming from when she helped keep the big secret about Beth Spencer (River Davidson and Madeline Valdez).

But eventually Wyatt did move past his initial shock and horror over Flo’s deception, and he found forgiveness in his heart. Unfortunately for Sally, he also discovered that he was still very much in love with Flo and that he wanted to give their relationship another go.

Well, according to B&B spoilers, Wyatt will soon tell Quinn about his plan to get back together with Flo, and Quinn is going to be beyond overjoyed.

In fact, Quinn will be so happy that it looks like she’ll quickly make a beeline for Flo. She’ll probably want to celebrate Wyatt and Flo’s reunion, although things won’t quite be as simple as Quinn thinks.

As B&B viewers know, Sally has decided to dig in her heels and fight for her man. She told Wyatt “no” when he attempted to break up with her, and she declared that she wasn’t going to make it easy to break off their relationship and their engagement.

Well, it seems that Quinn will have a remedy for that. According to the Bold and the Beautiful spoilers, Quinn will sit down for a chat with Flo, during which she pushes Flo to marry Wyatt as soon as possible.

Now, Flo certainly wants to get back together with Wyatt and she’d probably love nothing more than to marry him and start a family…eventually. But it might seem a little soon to just jump into a marriage right away, especially since Wyatt was just engaged to Sally.

And in Sally’s mind, she’ll still be engaged to Wyatt. So really, Quinn will be pressuring Flo to marry Wyatt when he’s still technically engaged to Sally. Flo just might put the breaks on and tell Quinn that she needs to calm down, although it’s pretty difficult to get Quinn calmed down when she gets something like Wyatt’s happiness in her head.

We should also note that Quinn’s attempts to get rid of Sally from Wyatt’s life and replace her with Flo will come at a really unfortunate time for Sally.

As B&B viewers know, Sally has been exhibiting some serious physical symptoms which include uncontrollable shaking. She’ll soon get medical help, and it’s looking like she could have a serious illness. And all while Quinn’s gunning to get rid of her!

At any rate, one wonders just how quickly Wyatt will decide that he wants to marry Flo, and vice versa. Relationships tend to move pretty quickly on the Bold and the Beautiful, so you never know when we could see Wyatt pop the question.

Do you think that we’ll see Flo and Wyatt get engaged in short order? Stay tuned to B&B and don’t forget to check CDL often for the latest Bold and the Beautiful spoilers, updates, and news.