The Bold and the Beautiful Spoilers: Quinn Schemes Herself Out Of Forrester Mansion – Eric Turns To Donna? 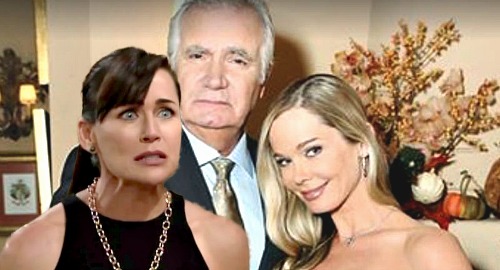 The Bold and the Beautiful spoilers document that Quinn Fuller Forrester (Rena Sofer) appears to be the matriarch of the Forrester family. She’s the only person who thinks of herself that way, which is a problem.

All of the scheming she’s done behind her husband’s back is building toward a daytime crescendo. In time, when all the soapy boxes have been checked, Quinn is likely to find herself out of the Forrester mansion.

Instead of Brooke Logan (Katherine Kelly Lang) being banished, Quinn will be. With that Eric Forrester (John McCook) will have an opportunity to reset his romantic life.

Eric has deep love for Quinn. There’s no denying that. He’s told various people that Sofer’s character does something for him that he can’t define in words.

Based on his legendary forgiving nature, it is reasonable to estimate that Quinn could survive what will be a stunning reveal. However, her open defiance of Eric’s wishes, in not laying off Brooke, as he requested, but instead secretly attacking her, is highly problematic.

Quinn has even admitted to Shauna Forrester (Denise Richards) that Eric might end their marriage if he ever learns the full truth about what happened in Las Vegas, Nevada. As B&B fans know, the events included Quinn’s full orchestration of the Bridge’s divorce and the Shidge marriage.

Bold And The Beautiful Spoilers – Donna Logan Is Available And Interested

Eric has retained his fondness for his one-time wife. Donna Logan (Jennifer Gareis) is a vivacious woman, who he was married to during the last part of the 2000’s.

Seasoned viewers took note of recent scenes between Donna and Eric. The implication of their playful dialogue meant that a spark could be reignited if the right circumstances existed in the future.

Combine that with Gareis’ recent Instagram tease, where she says she’s holding a B&B secret, and maybe Donna and Eric are destined to reunite?

Eric will have a choice to make when, likely not if, he learns about Quinn’s cruel actions. Keep Queric, or move on?

It took Eric a number of weeks to deal with the disappointment he felt about Quinn’s cabin kiss video exploitation. But he got over it.

However, a direct hit to what Queric is supposed to represent won’t be anywhere near as easy to digest. In fact, Eric will surely reject Quinn’s rationalized excuses, when they’re given.

So, Quinn’s insertion of herself into Ridge’s marital matters merely set the scene. Now, in the not too distant future, Donna is someone who stands to benefit.