The Bold and the Beautiful Spoilers: Sally Convinces Wyatt To Marry Her – Grants Final Wedding Wish as ‘Death’ Draws Near?

BY Heather Hughes on March 26, 2020 | Comments: one comment
Related : Soap Opera, Spoiler, Television, The Bold and the Beautiful 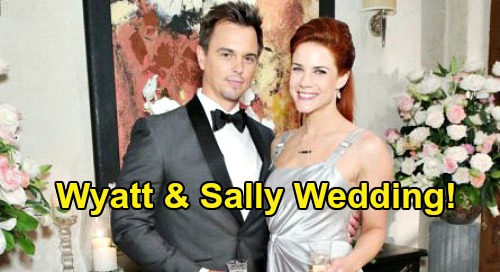 The Bold and the Beautiful (B&B) spoilers tease that Sally Spectra (Courtney Hope) will put the next phase of her plan in motion. Dr. Penny Escobar’s (Monica Ruiz) eager to get this “miracle cure” show on the road, but Sally can’t take that step just yet. If Sally’s terminal illness suddenly goes away, she won’t be able to keep Wyatt Spencer’s (Darin Brooks) attention.

That attention is crucial since Sally hopes to remind Wyatt of their old connection. Sally wants Wyatt to fall back in love with her, but she needs a little more time to make that happen. It’s a tricky situation since Sally also can’t take too long. There’s a lot to juggle between Sally’s fake decline and tugging at Wyatt’s heartstrings, but she’ll rise to the challenge.

Naturally, Sally will face some close calls as this hot plot gets hotter. B&B fans know Sally’s already got some issues thanks to her panicky ally. Penny’s feeling in over her head, but Sally’s pressuring her to stick to the plan. As far as Sally’s concerned, this plot’s working and just needs longer to play out. Sally may be right, but Flo Fulton (Katrina Bowden) will definitely create some roadblocks.

Flo and Wyatt’s love is a problem, but Sally thinks she can overcome that one. If Flo learns the truth and blabs, that could certainly be a far worse obstacle to deal with. All Sally’s progress with Wyatt would go up in smoke! The Bold and the Beautiful spoilers say Flo will launch an investigation and nearly push Penny to her breaking point, but we’ll see how long the doc can stay tight-lipped.

As for Sally, she’ll propose a deal during the week of April 6-10. During a deep conversation with Wyatt, Sally will try to pull him closer with a tradeoff. She’ll suggest a little quid pro quo, but what will that mean exactly?

Perhaps Wyatt will be frustrated over Sally showing off her independent streak again. Wyatt might feel like Sally’s shutting down or not letting him help enough. Sally could agree to palliative care and extra support from Wyatt, but she could also ask for something in return. Could that something be a wedding?

Sally might gush about how she always wanted to be a bride and will never have the chance now…unless Wyatt gives her that chance. Although Sally knows how Wyatt feels about Flo, she could suggest this would just be a parting gift. Wyatt would be granting Sally’s final “dying” wish.

Of course, B&B fans know Sally’s not actually suffering from a terminal illness, but this would be an excellent way to trap Wyatt. Sally might hope that marriage ties would keep them together after that “miracle cure” finally comes.

The Bold and the Beautiful spoilers say Sally will definitely have a few tricks up her sleeve. We’ll have all the latest news as other B&B updates roll in. Do you think Sally will talk Wyatt into a wedding? Will Wyatt get trapped into a marriage as Sally’s “death” draws near? Don’t forget to drop in regularly and read up on all CDL’s Bold and the Beautiful spoilers, updates and news.