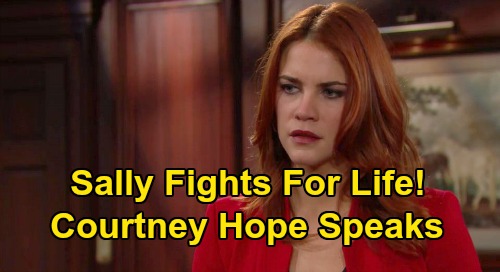 The Bold and the Beautiful (B&B) spoilers tease that Sally Spectra (Courtney Hope) will face a difficult battle. During the week of January 20-24, Sally will decide it’s time to head to the doctor. She’ll have a lot on her plate, but she’ll think this step is necessary if she wants to really take care of herself.

In an interview with Soap Opera Digest, Courtney Hope opened up about Sally’s looming diagnosis and how her illness will affect her. “Sally has been having quite a bit of headaches that have progressed to dizziness, and she is not really quite sure if it’s stress or if there is an underlying issue,” the B&B star explained.

Of course, that’s what this doctor trip is for. Sally will want to find out if there’s something she needs to be concerned about. She’ll hope for the best, but she should be fearful in the back of her mind. Sally isn’t someone who gets sick very often, so part of her will expect that there’s a deeper problem than just anxiety.

The Bold and the Beautiful spoilers say Sally is indeed ill, although what she’s suffering from isn’t known just yet. Regardless, this isn’t going to be an easy fight for Sally, especially after her upcoming split from Wyatt Spencer (Darin Brooks). “Sally is feeling really alone,” Hope said. “She doesn’t like to share. She doesn’t want to show anyone that something is wrong…”

Nevertheless, Sally will be awfully vulnerable after this appointment. She’ll bump into Katie Logan (Heather Tom), who’ll gladly lend an ear. Katie will sense that Sally needs to open up, so she’ll coax Sally’s worries out of her.

It’ll be good for Sally to let her walls down and just express all her emotions. “I think she needs it more than she thinks she does,” Hope admitted. As for what’s next, Sally may not be sure. She’s definitely a fighter, which Katie will remind her of. No matter what illness Sally’s facing, she’ll do her best to rise to the challenge and move forward.