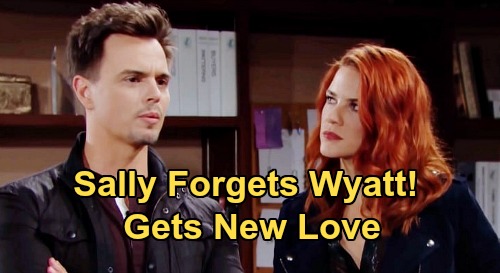 The Bold and the Beautiful (B&B) spoilers tease that Sally Spectra (Courtney Hope) could use a reboot when new episodes return. B&B fans once praised Sally as a strong, fierce character, but she’s been written into a pretty pathetic corner. It’s clear that major changes need to be made if Sally’s going to get back on track.

Sally has been burned by Wyatt Spencer (Darin Brooks) more than once, but she’s trying to sign up for more pain. Is Wyatt really worth faking a terminal illness over? Sally’s a smart, gorgeous and talented woman in Los Angeles!

There should be guys lining up around the block to date Sally, but she’s stuck on this waffling Spencer who doesn’t want her.

If you have to pretend you’re dying to make a guy pay attention to you, you’re doing it wrong. Sally’s world is bound to blow up over her scheme, but there are ways out of this jam. We shouldn’t worry too much about Sally’s punishment considering so few characters ever really pay for anything on B&B.

Flo Fulton (Katrina Bowden) got off the hook for helping with the bogus adoption, so there’s no reason Sally can’t wiggle out of trouble, too. Once Sally can finally put this mess behind her, she can focus on rebuilding her life.

Many Bold and the Beautiful viewers would like to see Sally ditch this Wyatt fixation and concentrate on self-respect.

Steffy Forrester (Jacqueline MacInnes Wood) is getting a new man, so maybe Sally will get one of her own down the road. Multiple new characters are coming to B&B, so you never know!

Of course, Sally will perhaps need time to work on herself first. Sally can do some self-reflecting and realize just how low she sank with this terminal illness scam.

Although Sally’s always had a scheming side, this plot was truly terrible and beneath her. No one wants to see Sally lose her feisty spirit, but there has to be a balance.

Sally can still be a scheming Spectra without resorting to tactics as dirty as pretending she’s dying! Let’s hope Sally can rise above all this and reclaim her spot as a strong woman on B&B.