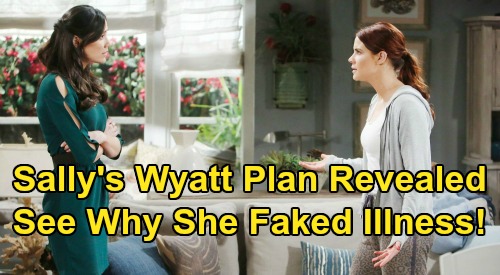 The Bold and the Beautiful (B&B) spoilers tease that Sally Spectra (Courtney Hope) has quite the scam going. For those of you who might have missed episodes due to coronavirus preemptions, here’s what went down. Sally got a house call from her doctor, Penny Escobar (Monica Ruiz), who stressed that how Sally was going about things was all wrong. They argued, then Wyatt Spencer (Darin Brooks) arrived home and Sally confessed to him that she was dying.

From there, Wyatt confessed that he already knew about her illness, as did Flo Fulton (Katrina Bowden), and that he and Flo weren’t really broken up. Sally reeled, but Wyatt got her calmed down and she eventually agreed to stay at the beach house and let him take care of her. But when Wyatt left, Dr. Escobar fumed and said that Sally shouldn’t string Wyatt along. Sally then revealed that she wasn’t really dying.

Well, this was certainly a shocker to B&B viewers, and as it stands, we have no clear sense of why Sally is pretending like she’s dying or how this scam came to be. Why on earth would Sally take steps to convince everyone that she’s dying – apparently to the extent of getting Dr. Escobar involved in the sham? What’s Sally’s endgame here?

One possibility is that Sally really did think she was dying in the beginning, and that Dr. Escobar did, too. The test results may have initially come back saying that Sally was terminally ill, then later it could have been discovered that there was a terrible mistake. Dr. Escobar could have contacted Sally off-screen and told her that there was a mistake and that she was going to be ok after all.

But perhaps at that point, Sally had already figured out that Katie Logan (Heather Tom) blabbed about her illness to Wyatt, Ridge Forrester (Thorsten Kaye), and Steffy Forrester (Jacqueline MacInnes Wood). After all, it probably was obvious to Sally that Wyatt, Steffy, and Ridge knew about her diagnosis after (a) Wyatt wanted to reunite, and (b) Ridge decided to use Sally’s designs in Forrester Creations’ couture collection.

Perhaps Sally realized that she needed to keep her illness going in order to keep Wyatt and to keep her designs in the couture collection. This theory would explain all of Sally’s physical symptoms – they could be real symptoms that are simply caused by something other than a terminal illness. In other words, Sally could still have some health problems, but not be dying.

Of course, another possibility is that Sally faked her diagnosis from the get-go, as some sort of attempt to get Wyatt back. She did get her diagnosis shortly after Wyatt dumped her, and she could have enlisted Dr. Escobar to give her fake results in front of Katie. This would have taken quite a bit of coordination on Sally’s part, though.

Plus, it’s also the case that Sally was shown having physical symptoms – like shaking hands, dizziness, and stumbling – when no one else was around. It seems like if Sally had been faking from the beginning, then she wouldn’t have bothered to have symptoms and experience distress when no one was looking.

We suspect that Sally might have gotten inaccurate test results initially, but then when she found out about the mistake, she decided to keep going with the illness story in order to keep Wyatt and her job at Forrester. But we’ll see what answers come on B&B during the week on March 23-27. It will be interesting to see what Sally’s story is.

Why do you think Sally is misleading Wyatt and everyone else about her health status? Keep reading CDL for all your B&B spoilers, news, and updates, and tune in next week to the Bold and the Beautiful to find out what Sally is up to!