The Bold and the Beautiful Spoilers: Sally’s Pregnancy Plot – Sleeps With Drugged Wyatt, Wins Her Man With ‘Wally’ Baby?

BY hellodrdavis on March 30, 2020 | Comments: 2 comments
Related : Soap Opera, Spoiler, Television, The Bold and the Beautiful 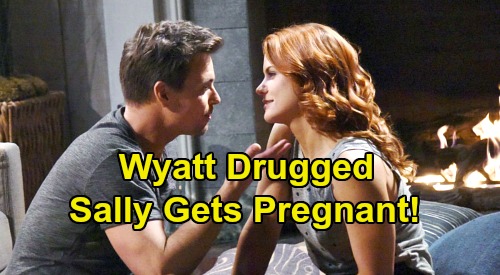 The Bold and the Beautiful (B&B) spoilers tease that Sally Spectra (Courtney Hope) will really ramp up her plans to get Wyatt Spencer (Darin Brooks) for herself. As B&B viewers have recently learned, Sally’s pretending to be terminally ill in order to score some alone time with Wyatt and keep him away from Flo Fulton (Katrina Bowden). Even though Sally knows that Wyatt is still seeing Flo, she thinks that she still has a shot if she acts fast.

Of course, Sally has no choice but to act fast, since she is supposed to be dying in the next couple of weeks. She’s managed to use her “illness” to get Wyatt to convince himself that he needs to be there for her during her final days.

Wyatt believes that Sally is depending on him to care for her and make her final days bearable, and he takes that role very seriously. But Sally is taking her mission to win back Wyatt seriously, too. She’s got just a couple weeks to get him back and then feign a miracle cure with the help of Dr. Penny Escobar (Monica Ruiz).

So, Sally needs to act fast. Well, B&B spoilers indicate the general trajectory that Sally’s going to take in achieving her goal, and unfortunately it doesn’t look so great for Wyatt.

The Bold and the Beautiful spoilers say that Sally will play up the fragile nature of her condition, so it looks like she’ll really lay it on with the “symptoms.” Sally will even start using a walker to get around, ostensibly to prevent her from stumbling when she supposedly gets light-headed.

Then, she’ll arrange a romantic setup for Wyatt at the beach house, probably saying that she just wants them to enjoy some time together.

And since Sally will probably have an inkling that Wyatt may be hesitant to engage in any romantic activity with her given how he feels about Flo, there’s a good chance that she may get devious in making Wyatt more…well…pliable.

What if Sally goes down that same path, drugging Wyatt so that she can have her way with him while he’s under the influence? If Sally goes that route, that would certainly be considered rape, but Sally seems like she’s willing to do just about anything at this point to get Wyatt for herself.

It’s a terrible thought, but Sally could be thinking that a pregnancy would be the way to get Wyatt to commit to her and stay committed to her.

So, could we see Sally drug Wyatt, have her way with him, and hope for a pregnancy out of the deal? We think there’s a good chance that Sally might. After all, in Sally’s warped mind, she could be looking to give Wyatt something that Flo can’t, in order to make her more attractive to him. Sally might think that a pregnancy would do the trick.

Of course, such behavior on Sally’s part would really push her character in a much more devious (and criminal) direction. But drugging Wyatt is probably the only way that she’s going to get intimate with him at this point. Sally’s desperate, and time is of the essence. She doesn’t want to lose out to Flo, and she seems to be willing to do just about anything.

Do you think Sally will resort to drugging and raping Wyatt to get pregnant? Be sure to keep up with B&B and keep CDL bookmarked so you don’t miss out on the latest Bold and the Beautiful news, spoilers, and recaps.