The Bold and the Beautiful Spoilers: Should Steffy Choose Love or Business – Can Forrester Queen Have Both? 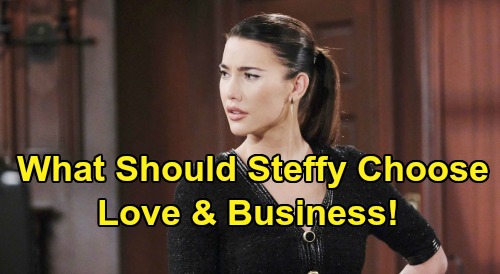 The Bold and the Beautiful spoilers document that Steffy Forrester (Jacqueline MacInnes Wood) has often had her heart broken. Separately, she’s earned her solid reputation in the fashion world over a long period of time. That’s not an easy mark to have reached, considering that some people could claim her family ties greased business skid.

Actually, in Steffy’s case, her family situation opened doors, but also created hindrances. The name Thomas Forrester (Matthew Atkinson) comes to mind as a past and potentially soon-to-be revived thorn in her side.

B&B can write Wood’s character into continuing her choice. When last Steffy was seen she wasn’t pursuing her often-times love interest, Liam Spencer (Scott Clifton). Of course, Steffy has had other genuine romantic pursuits in the past. But maybe her decision to remain single projects as the best course in the immediate future as well.

Bold And The Beautiful Spoilers – Starting With Liam Spencer

Yes, he’s the father of her child, Kelly Spencer (Avalon and Colette Gray). But Liam has gone back and forth between Steffy and Hope Logan (Annika Noelle) far too many times.

Steam is a great couple’s nickname. But that particular pairing also, eventually becomes trouble for Steffy. Here’s hoping that she doesn’t even consider spending time thinking about Liam, unless he somehow breaks from Hope and remains single for years.

Steffy and Liam have been married on three separate occasions. So, they clearly have a connection. But it hasn’t been sustainable and that’s the problem.

Bold And The Beautiful Spoilers – Wyatt Spencer Can’t Be Discounted

Wyatt Spencer (Darin Brooks) is Steffy’s only other husband. They weren’t married for long, but had a real connection.

Fans can rightly say that Wyatt’s apparent greatest love is Flo Fulton (Katrina Bowden). So, unless B&B plans to write her out of the show, as part of the current storyline where she was knocked unconscious, Wyatt will likely stay with her.

However, it’s not far-fetched to believe that Steffy and Wyatt could grow close after he learns that Sally Spectra (Courtney Hope) has once again betrayed him. And the possibility of Flo remaining unconscious for an extended period of time could create a scenario where Wyatt needs to lean on his ex-wife for support.

Ridge Forrester (Thorsten Kaye) has boxed himself into a precarious position with Brooke Logan (Katherine Kelly Lang) and Shauna Fulton (Denise Richards). As long as that triangular pressure exists, he won’t be able to approach his responsibilities at FC with the same measure he’s taken during past periods of personal stability.

But Steffy is the co-Chief Executive Officer. The company needs her to step up and she can, while hopefully being able to keep a returning Thomas blocked from gaining power. Doing that without risking romantic distractions is reasonable advisable, at least for awhile as Steffy deserves eventual, sustainable love.