The Bold and the Beautiful Spoilers: Steffy Finds New Man Who Wants Only Her – Realizes Liam Will Never Be Loyal? 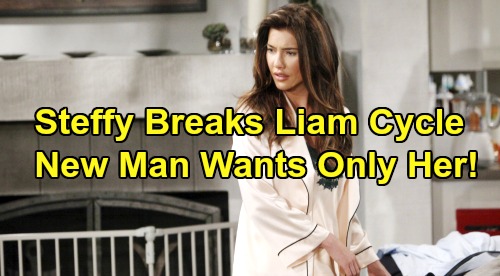 The Bold and the Beautiful (B&B) spoilers tease that Liam Spencer (Scott Clifton) may be poised for some major romantic changes. He was dragging his feet on a marriage proposal to Hope Logan (Annika Noelle) until Thomas Forrester (Matthew Atkinson) goaded him into it. Then, Liam put conditions on that marriage proposal, which certainly cheapens “Lope’s” love story.

If Liam truly loved Hope with all his heart, there wouldn’t be stipulations. Liam wouldn’t be asking Hope to make sacrifices about important things she cares about because of what HE wants.

Thomas has proven to be unstable at times and his threat was pretty disturbing, but it was just that – a threat. A scare tactic. It’s not like Thomas pointed a gun at Liam and shot him in the office.

Liam’s asking Hope to go against what’s best for her line by giving up her business collaboration with Thomas. He’s also asking Hope to give up shared custody of Douglas Forrester (Henry Joseph Samiri) – to go back on a promise she’s already made to a little boy.

If Liam was all in on this relationship, he’d be willing to marry Hope whether she did what he wanted or not.

The fact that Liam would rather forgo marriage than deal with Thomas tells us all we need to know. Perhaps Liam knew this marriage proposal would fail going into it. Maybe that was his goal – even if it was a subconscious one. Liam’s feelings for Steffy Forrester (Jacqueline MacInnes Wood) may have left Liam looking for reasons to bolt.

Whatever the case, Steffy will soon plant a kiss on Liam that could change everything. After Hope witnesses it, she’ll have some big decisions to make about the future.

All signs point to a Liam and Steffy reunion in 2020, but how long will it be until Liam screws that up, too? This constant back and forth never ends with Liam. Someone has to end this ongoing “all about me” madness!

It feels like B&B’s pushing this angle of who Liam will chose, but why does it always have to be Liam’s choice? The Bold and the Beautiful fans know Liam is no prize at this point.

Could Steffy realize that after she “wins” Liam’s heart again? If history is any indication, Liam won’t be able to stay committed to Steffy this time around either.

Steffy’s just going to end up competing for Liam’s attention and affection as usual, but there’s no need when there are plenty of fish in the sea. If Liam finds himself pining for Hope despite his new “devotion” to Steffy, that could be a great jumping off point for a new romance.

Steffy might see that she has to break the cycle and find someone else who can love only her.

Do you think it’s time for Steffy to find a man who can commit to one woman? Will Steffy always have to battle with Hope if she sticks with Liam? The Bold and the Beautiful spoilers say some hot drama’s brewing, so stay tuned.