The Bold and the Beautiful Spoilers: Summer Seeks Flo & Wyatt’s Help – Takes Sally Down in The Young and the Restless Crossover?

BY Heather Hughes on December 23, 2020 | Comments: Leave Comments
Related : Soap Opera, Spoiler, Television, The Bold and the Beautiful, The Young and the Restless 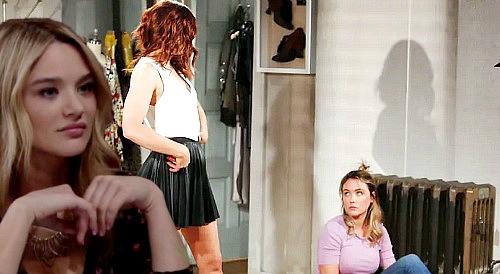 The Bold and the Beautiful (B&B) spoilers tease that an opportunity will fall into Flo Fulton’s (Katrina Bowden) lap – one that could potentially result in a fun The Young and the Restless crossover.

Now that Sally Spectra (Courtney Hope) has landed on Y&R, she’s making plenty of new friends as well as some enemies. This is the prime opportunity to pull Sally’s B&B past into the story, so let’s look at what’s in the works.

According to The Bold and the Beautiful preview info for 2021, Flo will be glad Sally’s out of town and no longer an issue in her relationship with Wyatt Spencer (Darin Brooks).

As far as Flo’s concerned, she’ll hope she never has to see Sally again! Sally caused more than enough drama by faking a terminal illness, holding Flo hostage and trying to trick Wyatt into getting her pregnant.

Although Flo will continue to enjoy freedom from Sally, a little piece of her wouldn’t mind getting revenge. It’s that piece of Flo that Summer Newman (Hunter King) may appeal to down the road. Here’s what we know so far.

The Bold and the Beautiful spoilers say Flo will be intrigued by a chance at payback on Sally.

Meanwhile, Y&R’s 2021 preview info reveals that Summer will get down in the mud to go up against Sally. The Young and the Restless spoilers say Summer won’t be afraid to play dirty – and she’ll plan to use Sally’s history as part of her plot.

Summer will feel like she needs to learn more about her rival, so she’ll take steps to score what she needs.

It makes perfect sense that Summer will pay Flo a visit and pump her for information. That also lines up with other Bold and the Beautiful spoilers for 2021. B&B fans can expect to see some new faces in Los Angeles – and they’ll tie in with Flo’s storyline.

Maybe Summer will seek Flo out while on a business trip to LA and offer Sally’s old rival a shot at vengeance. Summer might hope Flo will become her ally in an epic Sally takedown, so that’d leave Flo with a big decision to make.

If it all plays out like the spoilers suggest, we could see some great Y&R and B&B crossover scenes. Regardless, The Bold and the Beautiful spoilers say Flo will have to figure out if she wants to let the past stay buried or help sink Sally! We’ll provide updates as other news emerges.

It sounds like some exciting material’s ahead for Flo and Wyatt as 2021 gets underway. CDL’s your one-stop source for fantastic Bold and the Beautiful spoilers, updates and news, so be sure to stop by regularly.