BY Heather Hughes on January 28, 2020 | Comments: one comment
Related : Soap Opera, Spoiler, Television, The Bold and the Beautiful 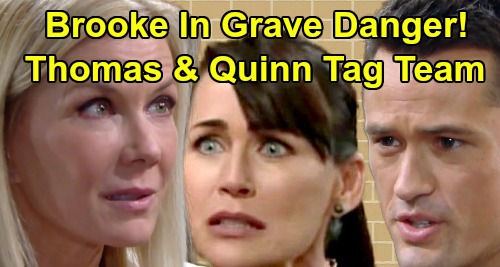 Once Quinn admits Brooke came into her home and ordered Eric Forrester (John McCook) to end his marriage, Thomas will think that’s so typical of Brooke.

After all, Brooke’s been making it her way or the highway with Ridge Forrester (Thorsten Kaye), too. As far as Thomas is concerned, Brooke is trying to poison everyone against him – and now she’s brought that same toxicity to Quinn.

Thomas will let Quinn vent before offering a chance at a partnership. He’ll think they’d be an unstoppable force against Brooke, but Quinn may have reservations.

For starters, Thomas hasn’t proven his plans work out all that well in the end. His involvement in the baby swap secret circle blew up in his face. Quinn may also realize that Thomas brings an unnecessary risk.

If Eric found out Quinn was helping Thomas, he might see it as Quinn dragging Thomas back to the dark side with her. It’s something Quinn could get blamed for.

Plus, Quinn’s the kind of gal who thinks she can handle things on her own. She may tell Thomas thanks, but no thanks – at least for now. The Bold and the Beautiful spoilers say Quinn will go past a sinister point of no return with Brooke. She’ll put a plan in motion – that there’s no mention of Thomas in that plan.

Now that doesn’t mean Thomas won’t get involved in it later, but he may work on his own Brooke takedown at first. He could always join forces with Quinn down the road. Whatever the case, B&B fans can expect a significant chat between Thomas and Vinny Walker (Joe LoCicero).

The Bold and the Beautiful spoilers say Thomas will lay out a disturbing revenge plot – one that even unsettles Vinny!

Vinny will likely try to talk Thomas out of whatever he’s cooking up, but what will that be exactly? Based on Thomas’ pitch to Quinn and hatred for Brooke, it seems she’ll be the target of this scheme for payback.

It doesn’t make sense for Liam Spencer (Scott Clifton) to be included in any of that right now. Thomas still needs Liam to reunite with Steffy, build a happy “Steam” family and stay away from Hope Logan (Annika Noelle).

Brooke may be Thomas’ sole target for the time being, but that could certainly change if Liam steps out of line!

Regardless, The Bold and the Beautiful spoilers say Liam will be keeping an eye on Thomas, which could spell trouble eventually. As for Brooke, she could be in grave danger between Thomas and Quinn!

We’ll keep you posted as other B&B news comes in. Stay tuned to the CBS soap and don’t forget to check CDL often for the latest Bold and the Beautiful spoilers, updates and news.