BY hellodrdavis on April 1, 2020 | Comments: 2 comments
Related : Soap Opera, Spoiler, Television, The Bold and the Beautiful 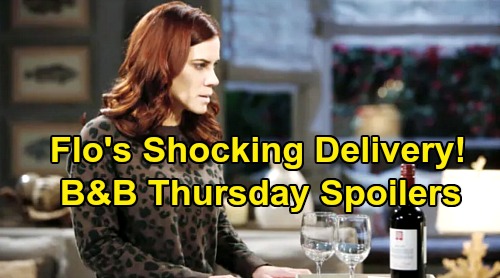 The Bold and the Beautiful spoilers for Thursday, April 2, tease that Sally Spectra (Courtney Hope) will continue on with her devious scheme to get Wyatt Spencer (Darin Brooks) for herself. As B&B viewers know, Sally is vying to spend as much time with Wyatt as she can, so that she can show him just how good the two of them can be together.

Sally wants to remind Wyatt of the great love that they shared, so that he’ll fall in love with her all over again. Unfortunately for Sally, she’ll get some intel on Thursday’s episode that will make her blood boil. According to B&B spoilers, Sally will eavesdrop on a conversation between Wyatt and Flo Fulton (Katrina Bowden).

Of course, both Wyatt and Flo are still under the impression that Sally is terminally ill, and they are trying to be respectful to Sally and allow her to spend her final days with Wyatt.

But it seems that Sally won’t like what she overhears Wyatt and Flo discussing. Wyatt and Flo might express just how in love they are with each other, and/or they might be talking about Sally.

Whatever the case, Sally will apparently decide to ramp up her efforts to win back Wyatt after she overhears their conversation. B&B spoilers indicate that Sally will even start using a walker, so it looks like she’ll try to whip up some sympathy.

It also looks like Sally will set up a romantic setup for her and Wyatt, to remind him of their history and the love they shared. And B&B spoilers say that Sally will end up sending Flo some sort of special delivery, which will probably be designed to drive a wedge between Flo and Wyatt.

We’ll see what that special delivery ends up being, but it could wind up being some photos of Wyatt and Sally together, perhaps looking a little too close for Flo’s liking.

Meanwhile, on the new episode of B&B on Thursday, April 2, Dr. Penny Escobar (Monica Ruiz) will find herself in a tricky situation. As B&B viewers know, Penny isn’t at all happy about the scam that Sally is pulling on Wyatt and the other people in her life. Penny and Sally may have words on Thursday’s episode, and if so, Penny will almost certainly leave the conversation frustrated.

Of course, Sally has Penny in a difficult position. Penny could conceivably lose her medical license, so she’ll be worried about that, plus she’s got Sally dangling a possible job at Forrester Creations in front of her.

As B&B viewers know, Penny wants nothing more than to break into the fashion industry, and Sally’s her ticket to do it. But it all depends upon Penny going along with Sally’s wishes right now, and that could be tough.

And ongoing B&B spoilers say that things will get even tougher on Penny when Flo decides to pay her a visit at the hospital. It looks like Flo will start to get suspicious of Sally, so Flo will want to get some additional information regarding Sally’s illness and prognosis.

Of course, at this stage in her supposed illness, Sally should have a palliative care plan all outlined and in progress, and she should be dealing with end-of-life plans as well.

Flo might think that it’s odd that Sally hasn’t talked much about these things, so she’ll go right to the source – Penny. That should certainly put Penny in a tight spot, since Sally really isn’t sick, and she has nothing to report.

But of course, Penny should be able to hide behind the medical regulations that say that doctors can’t discuss their patients’ health information with other parties. But something tells us that Flo will still press for details, and she’ll probably notice Penny’s nerves kick in.

There’s a lot of drama heating up for Thursday’s episode, so be sure to tune in! We’ll give you updates as more B&B news comes in. Stick with the CBS soap and check back with us here at CDL for the latest Bold and the Beautiful recaps and spoilers.