BY Heather Hughes on February 13, 2020 | Comments: one comment
Related : Soap Opera, Spoiler, Television, The Bold and the Beautiful 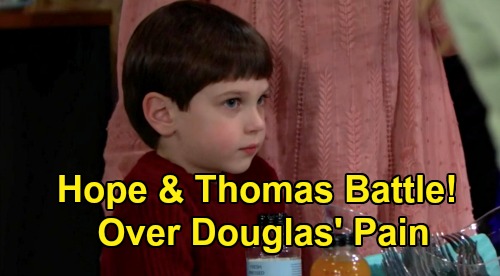 The Bold and the Beautiful (B&B) spoilers update for Thursday, February 13, teases that Thomas Forrester (Matthew Atkinson) will face some serious backlash. B&B fans know Thomas has been happily flaunting his new relationship with Zoe Buckingham (Kiara Barnes). After throwing Zoe a big birthday bash and handing over an extravagant gift, Thomas put on quite an affection show in front of his son.

Douglas Forrester (Henry Joseph Samiri) is now freaking out about Zoe replacing Hope Logan (Annika Noelle) as his mommy. He didn’t like that kiss one bit and is panicked at the thought of Zoe’s takeover. Although Hope did her best to reassure Douglas, she’ll sense that he’s still upset on Thursday. It’s clear that Thomas’ plan is working like a charm – and the next phase of it should work out well, too.

The Bold and the Beautiful spoilers say Hope will lash out at Thomas for what he’s doing to Douglas. She won’t think Thomas’ public display with Zoe was appropriate, not when it’s obviously taking a toll on the kid. Hope will just want Thomas to be a bit more sensitive here. She’ll think it’s important to put Douglas first, but she won’t expect the response she gets from Thomas.

B&B fans can expect Thomas to spin this around on Hope. He’ll think Hope’s the real culprit when it comes to Douglas’ pain. Thomas will point out that he’d prefer a future with Hope; he’s been upfront about that all along. That’s also what Douglas desires, but Hope has made her stance known. Since Hope won’t become a united family with them, Thomas won’t see why he shouldn’t move forward.

Of course, Hope should counter that she doesn’t object to Thomas moving on. The problem lies in the way Thomas is going about it and how it’s affecting Douglas. However, Thomas might argue that Douglas will have to get used to the new woman in his life. He may not see any reason to wait since Hope was clear about not wanting to be with him. Unless Hope’s had a change of heart…

Naturally, Hope hasn’t changed her mind yet, but Thomas will count on this moving the process along. The Bold and the Beautiful spoilers say this little guilt-trip will indeed get Hope thinking, so we’ll give you updates on this story as it progresses.

In the meantime, Brooke Forrester (Katherine Kelly Lang) will stand her ground on Thomas and what he’s done to her marriage. During another showdown with Ridge Forrester (Thorsten Kaye), Brooke will put all the blame on his son. She’ll think they’d be living happily ever after right now if Thomas hadn’t pulled them into so much conflict.

Ridge, on the other hand, will think Brooke is ignoring her own stubbornness. He’ll feel like Brooke should be willing to compromise, but she just won’t budge at all. Ridge may bring up Quinn Forrester (Rena Sofer) and Shauna Fulton (Denise Richards) during this fight, too. He might contend that no matter who Brooke’s battling, she’s never one to back down or meet anybody halfway.