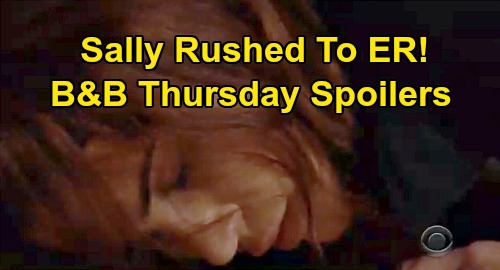 The Bold and the Beautiful spoilers for Thursday, July 30, tease that Wyatt Spencer (Darin Brooks) and Flo Fulton (Katrina Bowen) will watch in horror as Sally Spectra (Courtney Hope) lays still on the floor of her apartment.

As B&B viewers know, Sally was in the process of begging Wyatt for forgiveness for everything she has done when she suddenly started hyperventilating and collapsed.

While Sally’s collapse will at first be startling, it’s probably pretty likely that Wyatt and Flo will at least initially assume that Sally is faking. After all, it is Sally’s way to fake symptoms and lie to try to garner sympathy.

But it looks like Penny Escobar (Monica Ruiz) will step in and do a quick check on Sally, revealing that Sally is truly unresponsive and having a real medical emergency.

Well, that’s going to cause Wyatt, Flo, and Penny to freak out. Flo may be especially worried, since she is responsible for Sally falling and hitting her head earlier.

That’s something that could be causing some complications, and so Penny will probably insist that they get the EMTs on site immediately. Soon, Sally will wind up at the hospital, where she’ll be treated by a new doctor, Joyce Griffith (Lisa Canning) and she’ll get updates on her condition.

Liam will be horrified to learn about Steffy’s accident, and according to B&B spoilers, he’ll rush to the hospital where Brooke will update him on Steffy’s condition and how she’s in tremendous pain but is stable and alert.

Exactly how Bill is going to get past Ridge Forrester (Thorsten Kaye) and into Steffy’s room remains to be seen, since Ridge is going to continue placing blame on Bill for the accident.

At any rate, B&B spoilers say that Liam will arrive just in time to hear Bill’s confession about the accident to Steffy. Liam will probably need some time to absorb the fact that his father was responsible for Steffy nearly dying and leaving Kelly Spencer (Colette and Avalon Gray) without a mother.

Finally, it seems that Steffy and Liam will get some alone time, as Steffy asks Liam not to tell Kelly about the accident.

It looks like Steffy will continue to deal with her tremendous pain, and she’ll do her best to downplay the whole thing and come across as strong. In fact, knowing Steffy, she’ll probably want to do everything she can to get home to Kelly and get back to normal, although given her level of pain, that could end up being pretty challenging to do.

It sounds like a lot of B&B drama is heating up for Thursday’s episode, so stay tuned! We’ll give you updates as B&B news comes in. Stick with the CBS soap and don’t forget that CDL is your go-to source for all the latest Bold and the Beautiful spoilers, daily episode recaps, and news.