BY hellodrdavis on March 12, 2020 | Comments: 2 comments
Related : Soap Opera, Spoiler, Television, The Bold and the Beautiful 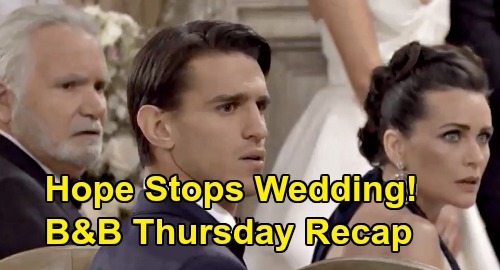 The Bold and the Beautiful spoilers recap for Thursday, March 12, reveal that Carter Walton (Lawrence Saint-Victor), Vinny Walker (Joe LoCicero), Eric Forrester (John McCook), and Quinn Forrester (Rena Sofer) made small talk ahead of the wedding ceremony, with Vinny looking nervous about how everything today would play out.

Meanwhile, up in Thomas’ bedroom, Hope told Douglas that everything will work out today while Thomas listened from the door. Ridge tapped him on the shoulder, startling him, and told him that it was time for the wedding to begin.

And in another bedroom, Zoe told Brooke Forrester (Katherine Kelly Lang) that she knew what she was doing and needed a few more minutes to dress for the wedding. Brooke said that if Zoe was feeling doubt, then she should listen to that feeling.

Over at Spencer Publications, Bill Spencer (Don Diamont) daydreamed about his kiss with Brooke. Wyatt Spencer (Darin Brooks) walked in and interrupted him. Bill grumped that Thomas had put Brooke and her family through hell and that someone’s got to stop him.

Wyatt agreed that Thomas was a psycho and that the wedding today was just a sham. He wondered if Hope would stop the wedding, and Bill said, “Who knows what she’ll do?”

Back in the Forrester living room, everyone but Zoe gathered and got ready for the ceremony to start. Vinny told Thomas quietly that he had to stop this wedding, and that he couldn’t marry Zoe. Thomas told him to chill, and that he had just heard Douglas get through to Hope. Thomas walked off, leaving Vinny upset.

The wedding march started, as Douglas clung to Hope as they sat watching. Carter started the ceremony, saying that Zoe and Thomas’ story was one of forgiveness and redemption, and eventually he said something about them being parents to Douglas.

Douglas freaked, saying, “No, Mommy, stop them!” He then ran upstairs, and Thomas was thrilled as Hope took off after him.

Ridge asked if they should go after Douglas, and Carter asked if they wanted to stop the wedding, but Zoe said no. Thomas suggested that they wait and give Douglas some time to calm down, but Zoe wanted to keep going, so Carter continued, then asked if anyone else objected to this union. Nobody said a word.

Zoe then said her vows, which were long and very loving toward Thomas. She promised to be the kind of woman who makes Thomas a better man and who makes Douglas happy. Carter then asked Thomas to say his vows, and he hesitated.

Zoe told him to just say what he was feeling, and he said he was feeling overwhelmed, then said some lame vows and promised to be thankful for her every day.

Next came the ring exchange, and Zoe started to put the ring on Thomas’ finger. Thomas said he wanted to stop because he wanted Douglas to be a part of this. Zoe said that she didn’t want to wait, and that in a few minutes they’d have the rest of their lives to celebrate with Douglas. The ring went on Thomas’ finger, then Thomas nervously put Zoe’s ring on her finger.

From their seats, Brooke and Liam looked at each other nervously, and Brooke whispered, “Do you think we could be wrong about this?” Liam whispered back that they were about to find out.

Meanwhile, it was time for the bride and groom to say “I do.” Carter asked Zoe if she took Thomas to be her husband and she said that she did. Carter then asked Thomas if he took Zoe to be his wife and he squirmed.

Thomas said, “I, um….” and then turned his head and looked down the aisle. Zoe turned her head as well, along with everyone else in the room, to see Hope standing at the end of the aisle with Douglas. Hope was wearing the Hope For The Future showstopper gown and Douglas smiled happily.

You won’t want to miss the next episode of B&B, so stay tuned! We’ll give you updates as more Bold and the Beautiful news comes in. Stick with the CBS soap and make sure you check CDL often for the latest B&B recaps, spoilers, and news.