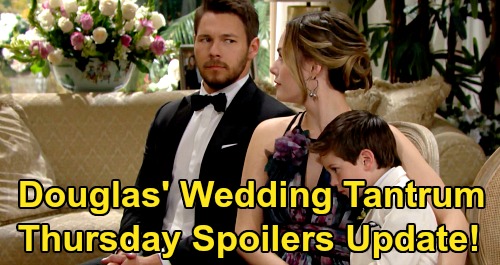 The Bold and the Beautiful (B&B) spoilers update for Thursday, March 12, teases that Thomas Forrester (Matthew Atkinson) and Zoe Buckingham’s (Kiara Barnes) wedding will bring major drama. Zoe will be on cloud nine as she prepares to marry her handsome groom. She truly believes she’s going to tie the knot and live happily ever after with Thomas, but this day should be far from a fairytale!

Thomas is counting on Douglas Forrester (Henry Joseph Samiri) to convince Hope Logan (Annika Noelle) to marry him, but he’s putting way too much pressure on the kid. Of course, Douglas also hates the idea of Zoe taking Hope’s place as his mommy.

The Bold and the Beautiful spoilers say it’ll all be extremely overwhelming for Douglas. He’ll end up throwing a serious tantrum right in the middle of the ceremony.

Once Douglas has his outburst, he’ll run upstairs and leave all the guests wondering what’s next. Hope will follow Douglas up the staircase and give him some comfort. That’ll also give Hope an opportunity to put her plan in motion, but let’s get back to all the wedding action first.

The Bold and the Beautiful spoilers say Zoe will want to proceed as planned. She’ll dismiss Douglas’ meltdown and insist that their vows should continue. Zoe will likely argue that Douglas will get used to the idea of this marriage in time. Zoe may assure Thomas that she can win her new stepson over once they’re a united family.

Thomas, on the other hand, will probably do his best to stall. He’s holding out hope that his preferred bride will come down in that showstopper gown, so he may claim he’s worried about Douglas.

Thomas might contend that they should wait until Douglas cools off and can watch them marry. He’ll just want to buy some time in case Douglas actually convinces Hope to wed.

B&B fans can expect Hope to rejoin the ceremony in the showstopper gown eventually, so Thomas will think his plan worked. He won’t realize it’s all part of the ruse designed to expose his manipulation! We’ll give you updates as this hot plot gets even hotter.

In the meantime, Bill Spencer (Don Diamont) will fantasize about his former flame. Wyatt Spencer (Darin Brooks) will walk in and inadvertently derail his dad’s daydream about Brooke Forrester (Katherine Kelly Lang). Once Bill snaps out of his Brooke trance, he’ll ultimately start ranting about Thomas.

Wyatt will be taken aback by Bill’s level of anger, but there’s a good reason for the escalation. Bill’s spark with Brooke has reignited, so he’ll likely channel that desire into fuel for his Thomas fight. He’ll also be feeling more protective of Brooke than usual, which means Thomas had better watch his back.