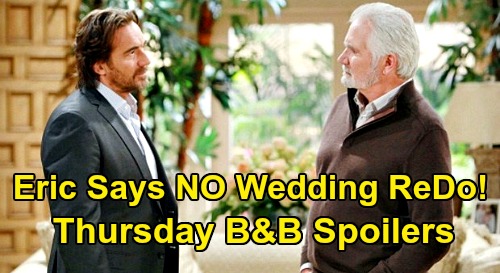 The Bold and the Beautiful spoilers for Thursday, October 1, tease that Carter Walton (Lawrence Saint-Victor) is going to be in for a pleasant surprise. As B&B viewers know, Carter has been on a bit of an upswing lately, as he’s recently begun dating Zoe Buckingham (Kiara Barnes).

Carter and Zoe are thoroughly enjoying their time together, and they look like they could be headed for great things.

Well, on Thursday’s episode of B&B, Carter’s life will improve in another way as well. It looks like Carter will have a talk with Ridge Forrester (Thorsten Kaye), during which Ridge drops the news that Carter is getting a well-deserved promotion.

This will be great for Carter – after all, he’s been on call for the Forrester family and Forrester Creations for a long time now, conducting regular business and the family’s many weddings on the side.

But might it cause a problem for Zoe and Carter’s relationship, given that Carter will be in a position of power relative to Zoe? Chances are, Zoe and Carter can work things out since they’ll be working in different departments, but it could crop up as an issue in the future.

Meanwhile, on the new episode of B&B on Thursday, October 1, Eric Forrester (John McCook) will apparently get wind of the plan for Ridge to remarry Shauna Forrester (Denise Richards) asap.

As B&B viewers know, Quinn has orchestrated a super-quick do-over wedding for Ridge and Shauna to solidify Shauna’s place as Ridge’s wife and to bring Brooke Logan (Katherine Kelly Lang) down a notch.

It looks like Eric will probably learn about the wedding from Quinn, who will be busy planning the ceremony and talking up the nuptials like they’re some big, great thing. But of course, Eric won’t see it that way.

Eric is a huge “Bridge” fan, and he wants Ridge and Brooke to work out their problems and get back together. Eric will of course have no luck with Quinn on this matter, so he’ll decide to go to Ridge and have a serious talk with his son.

According to B&B spoilers, Eric will attempt to talk sense into Ridge, arguing that he’s about to make a grave mistake. Of course, Ridge will probably argue that there’s no mistake to be made, since he and Shauna are already technically married.

Ridge just wants to give Shauna the wedding that she deserves, and he doesn’t see any harm in doing that, since there’s a big part of his that takes his commitment to Shauna seriously.

Given that ongoing B&B spoilers for the remainder of the week say that the wedding ceremony will at least get started, it doesn’t look like Eric is going to have any luck with dissuading Ridge from going through with the ceremony.

Eric will be there on his wedding day – which B&B spoilers say will end up being a day fraught with twists, turns, and some bombshells!

It sounds like a lot of B&B drama is heating up for Thursday’s episode, so stay tuned! Remember to keep CDL at the ready so you don’t miss any of the latest Bold and the Beautiful spoilers, updates, and news. And check out our daily episode recaps as well!