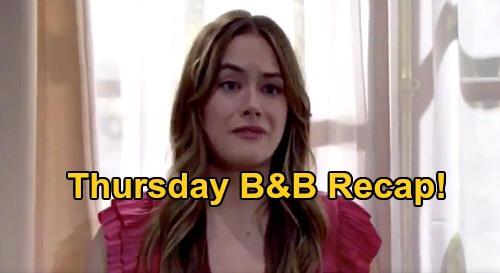 Standing in Brooke’s living room, Steffy insisted that she was going to get Kelly Spencer (Colette and Avalon Gray) and go back to her home. Hope suggested that Steffy stay there at Brooke’s place for the night.

Steffy fumed, saying she and Kelly would sleep at home tonight. Liam asked if Steffy really couldn’t see where they were coming from, and Steffy lashed out at Hope, saying that she had a hobby of collecting other people’s children.

Steffy insisted that she get her daughter back NOW, and she fumed that Hope was trying to get back at her for taking Beth Spencer (River Davidson and Madeline Valdez).

Brooke tried to get involved in the discussion, and Steffy balked. Liam said that Steffy was a great mom, and that as soon as she kicked the pills, she’d be a great mom to Kelly again.

Steffy raced up the stairs to go get Kelly, but Hope said that Kelly wasn’t there. “Tell me where she is!” Steffy yelled. Liam said that they couldn’t do that.

Soon, Hope got a message from Donna Logan (Jennifer Gareis) saying that she was back with the kids at the cabin. Hope said that Kelly was having a good time with her sister and her cousin, which is what they all wanted.

“It’s not close to what we wanted!” Steffy yelled, then she threatened to call the police and get them involved. Liam reminded Steffy that he was Kelly’s father, but Steffy insisted that he kidnapped Kelly.

Liam, Hope, and Brooke then tried to confront Steffy about her pill use and how she was lying about taking the pills.

Stuffy went on, saying that she didn’t need an intervention speech, and that this was all about the Logans taking from the Forresters. Steffy ranted that Brooke took from her grandmother, her mother, and now from her.

“I will not let you touch my daughter!” Steffy yelled. Liam said that they were stepping in to protect Kelly, and Steffy screamed that she wanted her daughter.

Meanwhile, over at the cliff house, Ridge Forrester (Thorsten Kaye) joined Thomas and asked where Steffy was. Thomas relayed what had happened with Steffy earlier, and how Steffy was behaving.

Thomas said that he was scared, and that Steffy wasn’t acting like herself. Thomas told Ridge about Steffy’s weird accusations about Liam kidnapping Kelly.

Ridge didn’t think that Liam would kidnap Kelly, and neither did Thomas. Ridge thought that maybe there was a simple misunderstanding, and Thomas said that Steffy said that Liam had called her an unfit mother.

Thomas said that Steffy was in a panic and acting paranoid. Ridge didn’t know what to do, and he tried to call Brooke but got voicemail.

Ridge finally decided that he should go over to Brooke’s place and see what’s going on, so he took off. Back at Brooke’s place, Brooke softly told Steffy that it was scary to admit that you have a problem.

Steffy responded with sarcasm, and Liam said that if he hadn’t shown up at Steffy’s place, then something could have happened to Kelly.

Steffy went on the attack again, blasting Hope for taking “Phoebe” away from her and for trying to replace Caroline Spencer (Linsey Godfrey) in Douglas Forrester’s (Henry Joseph Samiri) life.

Steffy went on, saying that Hope tore her family apart, just like Brooke tore her mom’s life apart. Steffy again insisted that she was going to go get her daughter, and Hope blocked her way, saying that Kelly would stay there until Steffy got the help she needed.

That was a terrific episode of B&B, and there’s plenty more coming tomorrow, so stay tuned! We’ll give you updates as B&B news comes in. Stick with the CBS soap and don’t forget to check CDL frequently for the latest Bold and the Beautiful spoilers, daily episode recaps, and news.