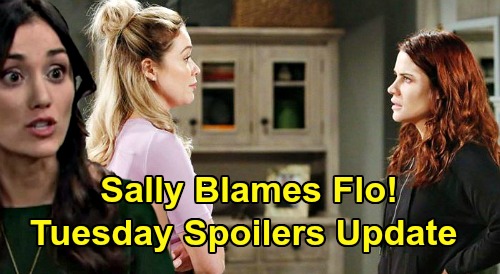 The Bold and the Beautiful (B&B) spoilers update for Tuesday, April 21, teases that Flo Fulton (Katrina Bowden) will push Sally Spectra (Courtney Hope) to come clean. There isn’t much Sally can do to deny her actions at this point. Thanks to the rubber snake trick, Flo got confirmation on Sally’s fake symptoms.

Flo also knows Sally was using makeup to appear ill, so Sally’s backed into a corner. B&B spoilers say Sally will cling to hope that she can wiggle out of this, but Flo won’t allow it. It’s time to fess up, so that’s ultimately what Sally will do. However, Sally will want to make one thing crystal clear following her confession: This is all Flo’s fault.

Of course, Flo will be appalled by that declaration. She certainly won’t think it’s her fault that Sally pulled a phony terminal illness scam! Nevertheless, Sally will stand by her claims. She’ll rant at Flo for destroying her relationship with Wyatt Spencer (Darin Brooks) and insist her rival’s to blame for the scheme, too.

If it hadn’t been for Flo, Sally never would’ve had to resort to such drastic action. Flo will obviously feel like that’s a twisted way of thinking. She’ll eventually get fed up and grab her phone – presumably to call Wyatt and rat Sally out.

The Bold and the Beautiful spoilers say Dr. Penny Escobar’s (Monica Ruiz) arrival will be a gamechanger. It won’t be long until she shows up and knocks Flo out, so B&B fans will want to stay tuned.

Meanwhile, Wyatt will get some guidance from Katie Logan (Heather Tom) and Quinn Forrester (Rena Sofer). It turns out they’ll agree when it comes to Sally’s living arrangements.

Wyatt revealed he told Sally to leave the beach house, which left Quinn and Katie stunned. Since Wyatt still seems conflicted, Katie will push him to open up on Tuesday. Wyatt may admit it was Flo’s idea and that he’s not entirely comfortable with it. Sally’s been revving up the guilt, so that’s definitely making things harder for Wyatt.

Katie has been in Sally’s corner since this fake illness scam started, so she’ll keep fighting for her. Although Quinn supports Flo as her pick for Wyatt, she’ll back Katie up on this. Sally is dying as far as they know. Quinn and Katie just won’t think it’s right to kick Sally out, so Wyatt may rethink this whole medical facility plan – at least for right now.