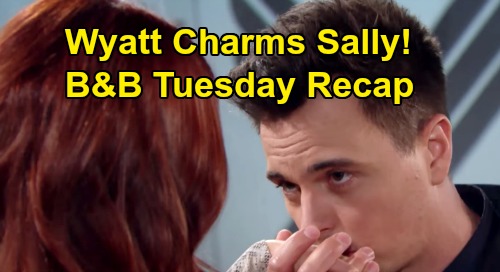 Steffy showed Ridge a sketch that Sally had done, saying that they had a problem on their hands. Ridge examined the sketch and he and Steffy agreed that Sally’s work was off.

They determined that something must be going on with Sally, since things were going fine for a while, then everything changed. Steffy said that they’d have to cancel the fashion showdown, and Ridge insisted that it was time to let Sally go.

Meanwhile, in the Forrester design office, Sally sat trying to sketch while Katie Logan (Heather Tom) walked in, worried. She wondered if Sally had done anything to explore other treatment options, but Sally said that it was pointless and that she didn’t want to spend the time she had left in doctors’ offices. Katie implored her to let Wyatt Spencer (Darin Brooks) help her, but Sally refused.

Over at Spencer Publications, Wyatt and Flo Fulton (Katrina Bowden) kissed, but Wyatt was distracted thinking about Sally. Flo suggested that Wyatt spend as much time with Sally as she’d let him, and Wyatt lamented that Sally didn’t have much time left.

Flo said that they could make the sacrifice for now – that they had the rest of their lives ahead of them. Wyatt then texted Sally asking her to come to Spencer for a visit.

Back in the Forrester design office, Sally got Wyatt’s message but didn’t want to go see him – she didn’t see the point, since Wyatt was with Flo now. Katie encouraged her to go, and Sally got up to leave as Bill Spencer (Don Diamont) walked in.

Bill told Sally that she looked good, which Sally thought was odd, and after Sally left, Katie told him that was smooth.

Katie then lamented about whether she had done the right thing by telling Wyatt about Sally’s condition. Bill said that Wyatt deserved to know, and that Sally needed Wyatt right now.

He insisted that Katie stop beating herself up, and he then revealed that from what he had heard, Sally’s design career at Forrester was soon to be history.

That really upset Katie, who decided that she couldn’t let that happen. She walked over to the CEO office, where Ridge and Steffy told her that they were about to fire Sally. Katie said that they couldn’t do that, and after a little back and forth, she told them that Sally was dying, which shocked Ridge and Steffy.

Over at Spencer Publications, Flo and Wyatt continued talking about how much time they would have together in the future, and how they needed to sacrifice now for Sally. Wyatt complimented Flo on her generous heart, then he got a call saying Sally was on her way up. Flo took off, and soon Sally came in.

Sally was immediately skeptical about why Wyatt wanted to see her, and Wyatt said that he missed her and that he was glad she was here. As Flo listened from outside the door, Wyatt told Sally that he and Flo were having some trouble lately, and that he sees her with new eyes. He said that he wanted to fix what was wrong between them.

Wyatt said that he hoped that Sally could give him some time to convince her that he deserved to spend time with her. Sally remarked that she didn’t have time, and Wyatt asked what she meant by that, but Sally covered. Wyatt said that he wanted to be with her, but she called him out on leaving her twice.

Wyatt said that he just wanted to focus on the here and now, and that he wanted to hold Sally. Sally cried as they hugged, saying that he didn’t know how much she needed the hug.

Wyatt said that he knew how strong Sally was, and that he wanted to be a part of her life. He said that she could count on him, and she cried as they hugged again. Flo cried as well as she listened from outside the door.

There’s a lot of B&B drama heating up, so be sure to stay tuned! Don’t forget to check back with CDL for the latest Bold and the Beautiful spoilers, updates, and news.