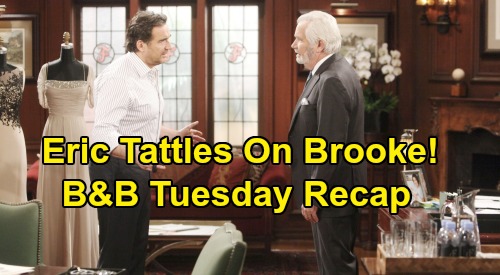 The Bold and the Beautiful spoilers recap for Tuesday, February 4, reveal that Brooke Forrester (Katherine Kelly Lang) and Quinn Forrester’s (Rena Sofer) argument raged on at the Forrester mansion. Quinn insisted that she didn’t want to go to war with Brooke, but Brooke ranted about how Quinn sent Shauna Fulton (Denise Richards) after Ridge Forrester (Thorsten Kaye).

During their argument, Brooke held the vodka-spiked juice bottle in her hands and nearly drank from it several times, as Quinn watched anxiously. Brooke went on about how Quinn doesn’t belong in the Forrester family, and Quinn reminded her that she had married into the family as well, so she really had no basis to judge.

Ultimately, Quinn egged Brooke on to do her worst, and they’ll see who comes out on top. Brooke gloated that she’d come out on top because Quinn wasn’t worthy. Brooke then took a long slow sip of her juice, downing the whole thing while Quinn watched. Brooke looked a little discombobulated but didn’t realize that she had just drunk alcohol. Quinn then told Brooke to leave, and Brooke obliged.

Meanwhile, at Spencer Publications, Liam Spencer (Scott Clifton) was distracted as he and Wyatt Spencer (Darin Brooks) chatted about work. Wyatt revealed that he knows about the kiss with Steffy Forrester (Jacqueline MacInnes Wood) and how Hope Logan (Annika Noelle) ended things. But Liam said he didn’t want to talk about his problems, so talk turned to Wyatt’s ordeal with Sally Spectra (Courtney Hope) and Flo Fulton (Katrina Bowden).

Wyatt recounted his breakup attempt with Sally, and how he wanted to reestablish his relationship with Flo. Liam was surprised by this, and he wondered how Sally was taking it all. Wyatt said that he was seriously worried about Sally, since she wasn’t taking it well and basically refused the breakup. He hoped that Sally had some support and wasn’t alone right now.

Next, at the hospital, Sally got support from Katie Logan (Heather Tom). Sally opened up about the symptoms she’s been experiencing and that she’s really scared that something’s wrong with her. She noted that she’s always been able to count on her good health, so this was new territory for her. Katie offered her advice and urged her to relax and not jump to conclusions – after all, the first step is finding out what she’s dealing with.

Katie ended up staying with Sally as she underwent her bloodwork, and later the doctor came in and said he was going to put a rush on her tests, and that she shouldn’t worry. After the doctor left, Sally confided that Wyatt wanted to break up with her and go back to Flo. Katie urged her to reach out to Wyatt for support, but Sally nixed that idea, saying that pity was the last thing she needed from him right now.

Meanwhile, in the Forrester CEO office, Eric Forrester (John McCook) entered to find Ridge fiddling with one of Thomas Forrester’s (Matthew Atkinson) designs, which they both loved. Eric said that they needed to talk about Quinn and Brooke, and he shared that the two ladies had gotten physical in their argument. Ridge was horrified by this.

Eric let Ridge know that Quinn had been thriving in their marriage because she felt secure, but now Brooke is undermining the whole thing. Eric said that he couldn’t have them fighting, and that he doesn’t like coming home to Fight Club in his living room. Ridge said that he’d talk with ‘Brooke and clear this whole thing up. Eric wished him luck.

Eric then returned home to the Forrester mansion where he met up with Quinn. Quinn wondered if he was still mad at her. Eric said that he didn’t want to be mad. They bickered a little bit about the best way to handle her feud with Brooke, and ultimately Eric suggested that she cut Brooke some slack and rise above the fray. They then hugged tenderly, while Quinn still wondered about the effect the vodka was having on Brooke.

Meanwhile, Brooke arrived at Forrester Creations and sat down with Ridge in the CEO office. Ridge went on about her feud with Quinn, but Brooke was distracted and kept looking at the liquor decanters sitting across the room. Finally, Brooke said that she needed to protect Eric from Quinn. Ridge disagreed and said that she was displacing her anger with him onto Quinn. As he continued talking, Brooke stared at the liquor bottles.