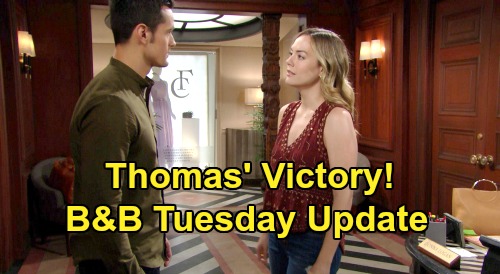 The Bold and the Beautiful (B&B) spoilers update for Tuesday, January 21, teases that Sally Spectra (Courtney Hope) will make a beeline for “Flo” Fulton’s (Katrina Bowden) apartment. She’ll think it’s time to put Flo in her place when it comes to Wyatt Spencer (Darin Brooks). B&B fans know Wyatt did his best to dump Sally, but she just couldn’t accept the breakup.

Instead, Sally will confront Flo about trying to steal Wyatt back and make it clear that she won’t stand for it. She’ll insist Flo’s going to have a real fight on her hands if she intends to dig her heels in.

Of course, Sally’s just in denial at this point. If Wyatt doesn’t love her the way he should, Sally can’t make him. Flo may remind Sally of that in Tuesday’s episode and urge her to let go.

That’ll be easier said than done for Sally, but she’ll eventually wrap her head around the split. Sally will turn her attention to another important matter later this week. She’ll head to the doctor and get updates on an illness she’s battling, so it’s a shame Sally will have to battle that illness without Wyatt by her side – at least for now.

Meanwhile, The Bold and the Beautiful spoilers say Thomas Forrester (Matthew Atkinson) will feel victorious. He’ll be ecstatic when Hope Logan (Annika Noelle) lets him offer comfort over her breakup from Liam Spencer (Scott Clifton). Thomas was hoping to blow up “Lope” and he got his wish. He’ll be glad to serve as a shoulder to cry on in the aftermath.

Thomas will feel like everything’s going according to plan, but he’ll have to be careful. Although Thomas is still obsessed with Hope, he can’t act like he is! For the time being, Thomas will need to make Hope believe he’s supporting her as a devoted friend and co-parent.

Thomas may remind Hope that they’ll be a family with Douglas Forrester (Henry Joseph Samiri) no matter what, so she’ll always have love in her life.