BY hellodrdavis on January 7, 2020 | Comments: one comment
Related : Soap Opera, Spoiler, Television, The Bold and the Beautiful 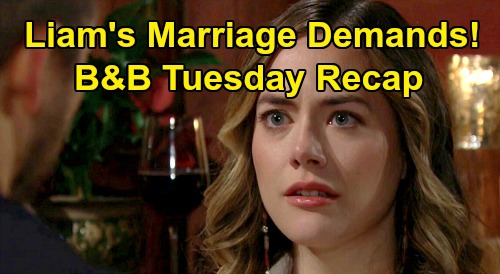 Steffy was horrified to hear that Thomas Forrester (Matthew Atkinson) had threatened Liam, but she was still skeptical about whether Liam was right about Thomas’ relationship with Zoe Buckingham (Kiara Barnes) being a ruse.

Liam let Steffy know that Thomas had basically admitted that he has never gotten over Hope and never will, and he lamented that he was the only one who could see what Thomas was doing. Liam then told Steffy that the Thomas situation was wearing on his relationship with Hope Logan (Annika Noelle).

Carter said that he appreciated being invited to the Forrester Christmas dinner, and he noted that he thought perhaps his services would have been needed over the holiday, and that maybe Liam would have popped the question to Hope.

Ridge then characterized the fact that Liam didn’t propose as a little Christmas miracle, and he told Carter that he thought Steffy was still in love with Liam, and that he might be in love with her, too.

Next, in the Forrester design office, Thomas told Hope that he was just looking after the mother of his child, and that he was worried about what might happen to Douglas Forrester (Henry Joseph Samiri) if Liam ends up leaving her.

Hope tried to center the argument back onto Thomas’ threat against Liam, and whether he was using Zoe, but Thomas managed to convince her that he simply said things in anger and that Liam had provoked him.

Ultimately, Hope told Thomas that she could see his side of things, and Thomas took the opportunity to criticize Liam for not yet proposing to her. He said that the reason Liam hadn’t proposed was because of Steffy, but Hope told him that he’s wrong and left, leaving a smiling Thomas behind.

Later, at Steffy’s house, Ridge played with Kelly Spencer (Zoe Pennington) as Steffy happily watched. Soon, Thomas and Douglas arrived, and Douglas went to check in on a sleeping Kelly. While he was away, Steffy called out Thomas on his threat against Liam.

Thomas admitted to it, but he said that it wasn’t like it must have sounded when Liam told the story, and that Liam came to him full of hate and making accusations.

Ridge seemed to accept Thomas’ explanation, although he didn’t like the threat aspect of the interaction. Steffy still seemed skeptical of Thomas, though, as Thomas went on about how he was just sticking up for himself and that Liam was never going to forgive him.

Thomas noted that it was a new year and that he was looking forward to a fresh start. Steffy still looked worried.

At the cabin, Hope arrived home to find Liam there with a romantic setting arranged. They kissed and Liam explained that Beth Spencer (River Davidson and Madeline Valdez) was asleep, and that they were going to have a nice evening together.

They shared wine as Liam talked about how the three of them being together was a miracle, and that he would always be grateful to Douglas for speaking up bravely.

Gradually, Liam worked his way around to something that started to sound like a proposal, and Hope started to happily catch on to what he was trying to do. Finally, Liam said that it was a new year and a time for commitments, and they could now make a commitment to put Beth and their family first, which made Hope smile big.

Liam then reluctantly broached the subject of Thomas, which prompted Hope to say that she had confronted Thomas and that he admitted saying all those things because he felt the need to defend himself.

Hope then alluded to Liam possibly provoking Thomas, which Liam couldn’t believe. Liam exclaimed that Thomas was manipulating Hope again, and that he had a favor to ask.

Liam then asked Hope to see Thomas for who he is – a liar and a manipulator. He said that he was scared that Thomas’ manipulation was working, and that he’s getting what he wants, which is to drive a wedge between them.

Liam then asked Hope to marry him and separate herself from Thomas and put the horror of what happened behind them. Liam went on to say that it has to mean Hope ending her collaboration with Thomas a Forrester, and that it has to mean ending the co-parenting, too.

Hope was stunned, but Liam went on, saying that they’d still be in Douglas’ life, but that they had their own family to take care of and that their duty was to Beth. Liam said that he couldn’t keep living his life with Thomas as a part of it.

Hope looked absolutely horrified as Liam said that she had to leave Thomas and his lies behind her, and that she needed to say yes, that she would marry him. Confused, Hope simply looked at Liam and hesitated.