BY Heather Hughes on March 31, 2020 | Comments: one comment
Related : Soap Opera, Spoiler, Television, The Bold and the Beautiful 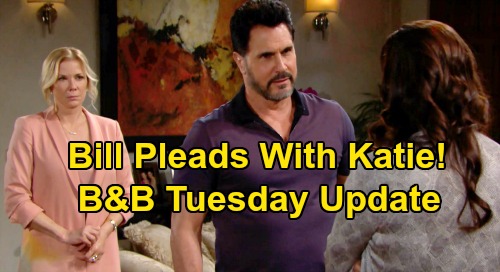 The Bold and the Beautiful (B&B) spoilers update for Tuesday, March 31, teases that Bill Spencer (Don Diamont) will plead with Katie Logan (Heather Tom) for another chance. Bill won’t want Katie to throw their family away over one mistake, but it’s Bill who’s to blame here. If Bill wanted his family kept together, he should’ve thought about that before he kissed Brooke Forrester (Katherine Kelly Lang)!

Nevertheless, Bill will try to convince Katie of his remorse and hope she can find forgiveness in her heart. Although Bill later daydreamed about his kiss with Brooke, he’ll leave Katie out of the loop on that part. Bill will maintain that the smooch was meaningless and urge Katie to understand. Of course, that’ll be tough for Katie, who’s been down the same path of betrayal so many times.

B&B spoilers say Bill will refuse to give up, but he really needs to give Katie some time to cool off. Katie’s deeply hurt and unbelievably angry right now, so maybe some space would be for the best. Getting in Katie’s face like this may make matters worse, but Bill just won’t be able to help himself. Despite Katie’s fury, Bill will think there’s something worth saving here.

Alas, Katie’s not going to wipe the slate clean and put that “Brill” kiss behind her – not yet anyway. The wound is too fresh for that. Even so, Bill will make it clear that he intends to keep fighting. As for Ridge Forrester (Thorsten Kaye), Quinn Forrester (Rena Sofer) will pressure him to go after Shauna Fulton (Denise Richards) and kick off a brand-new love story.

Since Shauna’s planning to head back to Vegas, Ridge needs to act fast. The Bold and the Beautiful spoilers say Quinn will spell out all the reasons why Ridge belongs with Shauna. Quinn will assure Ridge that Shauna truly cares, which is why she deleted that video. Protecting Ridge’s heart was what was most important to Shauna. It was Quinn who swooped in and caused this public spectacle.

Quinn already touched on some of that, but she’ll want to explain a bit more on Tuesday. Quinn will insist that Brooke is Ridge’s past and Shauna’s his future. B&B spoilers say Ridge will ultimately decide Quinn’s right – he has to stop Shauna from leaving town. That plan’s not going to work out exactly like Ridge expects, but he’ll choose to roll with Shauna’s decision later this week.