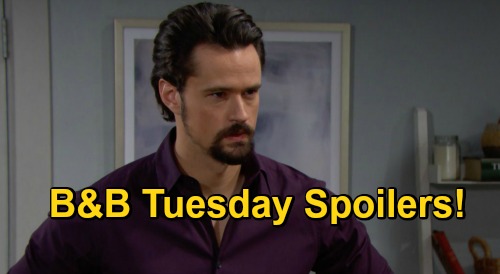 The Bold and the Beautiful spoilers for Tuesday, November 24, tease that Thomas Forrester (Matthew Atkinson) will do something to cause some serious upset.

As B&B viewers know, Thomas is currently at his apartment with Hope Spencer (Annika Noelle) and Douglas Forrester (Henry Joseph Samiri). Hope has just agreed to stay for dinner with Thomas and Douglas, and Thomas is happy about this development.

Unfortunately, Thomas is also subject to the Hope mannequin’s ongoing nagging in his ear. The mannequin has been telling Thomas that he needs to act now and make Hope and Douglas his family. The whole thing is upsetting Thomas, who’s trying to shake off the mannequin’s directives.

Well, now Thomas is starting to blur the lines between what’s real and what’s coming from his imagination. According to B&B spoilers, Thomas will make a critical error of some sort, which could be some type of overture toward Hope.

Or perhaps Thomas will have a serious breakdown as he’s trying to fight off what the mannequin is telling him to do.

Since Thomas has seen the mannequin come to life in the past, he might be faced with a situation in which he doesn’t know whether he’s dealing with the real Hope or the mannequin.

Thomas could end up behaving in a way that ends up scaring Douglas and/or Hope. Whatever the case, B&B spoilers indicate that Liam Spencer (Scott Clifton) will get wind of something going down at the apartment.

Might Hope call Liam to say that Thomas is acting strangely or having a breakdown?

This would mesh with The Bold and the Beautiful spoilers that say that Liam will arrive at the apartment to confront Thomas – Liam could think that Thomas has set out to gain Hope’s sympathy by faking a breakdown and rush over to confront Thomas and protect Hope and Douglas.

Unfortunately, it looks like Liam will come upon a shocking scene when he arrives at the apartment. Exactly what he ends up finding remains to be seen, but it will apparently involve something that appears to be Thomas and Hope in a compromising position.

The Bold and the Beautiful spoilers indicate that Thomas will be shirtless and will have his hands on what appears to be Hope.

Now, whether Thomas will be with the real Hope or the mannequin is an open question at this point. But B&B spoilers are clear that whatever Liam sees is going to really throw him for a loop, and he’ll leave the scene distraught.

One wonders where Douglas will be in all of this, and right now there are a lot of unknowns about what’s going to go down.

Of course, that’s all the more reason to tune in on Tuesday! We’ll be sure to give you updates as more B&B news comes in. Stick with the CBS soap and keep CDL at the ready for the latest Bold and the Beautiful spoilers, daily episode recaps, and news.