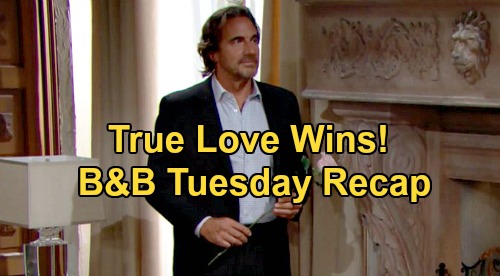 The Bold and the Beautiful spoilers recap for Tuesday, October 6, reveal that Katie Logan (Heather Tom) continued to urge Ridge Forrester (Thorsten Kaye) to believe that Shauna Fulton Forrester (Denise Richards) manipulated him. “I trusted her – she played me and lied to me,” Ridge finally uttered.

Katie rehashed everything that Quinn Forrester (Rena Sofer) and Shauna did to make the Vegas wedding happen, then she said that now Ridge and Brooke Logan (Katherine Kelly Lang) could reunite.

Ridge said that he needed to go talk with Shauna, and Katie begged him not to listen to her pleads and proclamations of love. Later, after Katie had gone, Ridge’s phone rang, and it was a video call from Shauna.

Shauna said that there was something weighing on her about their night in Vegas. “I know what you did,” Ridge said, and he went on to say that he knew about how Shauna texted Carter Walton (Lawrence Saint-Victor) so that they could be married.

Ridge brought up Quinn, and Shauna admitted that Quinn was involved, but that she could have said no. Shauna told Ridge that she loved him, and that’s why she called him to tell him the truth.

Shauna asked if Ridge could ever forgive her, and Ridge said that while he believed that Quinn pushed her, she could have said no. “You compromised yourself because you wanted to be Mrs. Ridge Forrester,” Ridge said.

Ridge told Shauna that he wasn’t going to go through with the ceremony, even before he found out what she did. Shauna said that she never would have let him stand and pledge vows to her with the secret between them.

Crying, Shauna said that she didn’t want Ridge this way with lies and manipulation, and that what happened in Vegas wasn’t who she is. Ridge simply said, “Goodbye, Shauna,” and hung up the phone.

Meanwhile, at the Forrester mansion, Brooke told Quinn that this ceremony wasn’t going to happen. Quinn wanted Brooke to leave, but Brooke insisted that she was going to put a stop to the wedding once and for all.

Quinn taunted Brooke, going on about how Shauna was going to be a faithful wife, which was something that Brooke could never be.

After a considerable amount of back and forth, Brooke demanded to see Ridge, but Quinn wouldn’t let her go upstairs. “Ridge is done with your endless betrayals and your constant boo hooing,” Quinn said. “Get over it and move on.”

Quinn went on, saying that SHE was the mistress of this house and still the Forrester matriarch, and that the only person being evicted from the family today was Brooke.

Over at Brooke’s place, Donna Logan (Jennifer Gareis) spoke with Hope Spencer (Annika Noelle), who wondered where Brooke was. Donna shared that Brooke went over to the Forrester mansion to stop the wedding, and together they rehashed all of Brooke’s suspicions about Quinn having a hand in Ridge and Shauna’s Vegas wedding.

Later, as Donna and Hope were waiting and worrying about what was going on at the Forrester mansion, Brooke walked in all droopy, having been unable to stop the wedding. Brooke said that she loved Donna and Hope, but that she just wanted to be alone right now.

Back at the Forrester mansion, Quinn was alone in the living room when Shauna called her. Quinn scolded Shauna for needing to be at the mansion right now for the wedding, but Shauna told Quinn that the wedding wasn’t happening. “My marriage to Ridge is over,” Shauna said in tears. Quinn looked horrified.

Back at Brooke’s place, Brooke stood in her bedroom crying and flashed back to Ridge’s return at the waterfall years ago. Suddenly, Brooke noticed a bunch of rose petals on the floor near the door, and she started getting hopeful.

Brooke followed the petals out of her room and down the stairs where she found Ridge standing holding a flower in his hands.

“The ceremony?” Brooke asked. “There won’t be a ceremony,” Ridge said. “I can’t exchange vows with Shauna. It’s always been you.” Ridge handed Brooke the flower. “I’ve always loved you, my beautiful Logan,” Ridge said, and he and Brooke kissed happily.

That was a terrific episode of B&B, and there’s a lot more coming tomorrow, so don’t miss the CBS soap! Be sure stick with CDL as your go-to source for all the latest Bold and the Beautiful spoilers, daily episode recaps, and news. We’re your hot source for all the soaps!