The Bold and the Beautiful Spoilers: Vinny and Finn Both Crossed The Line – But Who Caused Steffy’s Crisis? 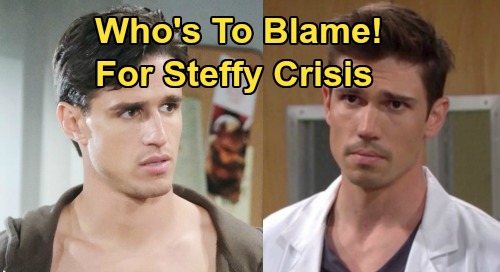 The Bold and the Beautiful spoilers document that Steffy Forrester (Jacqueline MacInnes Wood) is, without question, experiencing a personal crisis. It’s not debatable as to whether her life, is, or isn’t out of control. It is.

However, all viewer’s opinions about whose actions were the most irresponsible can be honestly offered and considered. This is the type of question that has significant grey conjecture areas that can be explored.

Bold And The Beautiful Spoilers – Vincent Walker Has No Medical License

Vincent Walker (Joe Lo Cicero) committed an illegal act, no matter what he says, or does, or chooses to believe. His name isn’t John Finnegan (Tanner Novlan) and Vinny sure as all get out is not a medical doctor.

Instead, viewers recall when Thomas Forrester (Matthew Atkinson) told his childhood friend that he was a drug dealer last year. Vinny fronted an immediate emotional response, as he failed to deflect Thomas’ accurate assessment.

The substances that Vinny provided last year, which Thomas used to spike Liam Spencer’s (Scott Clifton) drink at the cliff house, are no different, legally, than the pills Lo Cicero’s recurring character recently put in a bottle and inserted under a teddy bear that was the ruse gift he sent to Steffy.

Bold And The Beautiful Spoilers – John Finnegan Crossed The Line

Finn’s tell to Steffy, regarding the feelings he had for her, came after Liam questioned the doctor’s ability to remain part of this case.

While John later offered to replace himself as Steffy’s doctor, he apparently hadn’t done so as of the time in the plot when Wood offered a seeming Emmy-worthy performance in Brooke Logan’s (Katherine Kelly Lang) home, when pulling a switch blade in frantic defense of herself.

The doctor’s professionalism was compromised when he allowed himself to be persuaded into refilling Steffy’s initial prescription. It’s reasonable to wonder if he shouldn’t have done that, or if he sought any colleagues advice before agreeing to do so?

Would Steffy have been better served by another doctor at the point when she asked Finn for more pills on the first, or second occasion when she did so? Steffy, her loved ones, and audience will never know.

Should Steffy have been referred to a mental health specialist, whose specialization is pain management, so that person could have been part of a tandem approach recovery effort? The second guess questions about Finn can only be asked because of what’s happened to Steffy.

Bold And The Beautiful Spoilers – Steffy Forrester Must Take Control

Steffy requested the refill from Finn. He didn’t offer it to her first. Open minds know that Steffy wasn’t in a proper state of mind when Vinny’s pills arrived and that her specific circumstances enabled the start of what could become a full-blown addiction.

So, does Steffy have free will? Yes.

But did the drugs she took, meaning the two bottles of Finn-approved prescriptions, spread over approximately two months, and the one, or two pills she apparent took from Vinny’s illegal stash, cloud her judgement? Yes, and with that she doesn’t deserve to be vilified, but helped.

Then, as strength builds, Steffy needs to take control of her recovery.

So, which character, among those mentioned, or unmentioned, is most responsible for Steffy’s crisis? That’s a matter of opinion, as part of this very strong storyline, which is obviously and openly a congratulatory assessment.