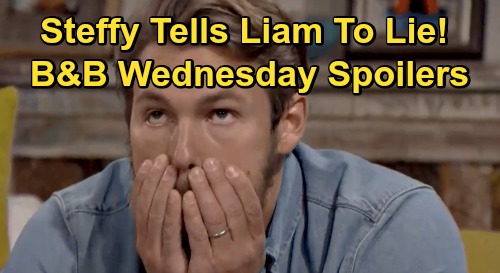 The Bold and the Beautiful spoilers for Wednesday, December 2, tease that Hope Spencer (Annika Noelle) will find herself in a scary situation. As B&B viewers know, Hope has just walked into Thomas Forrester’s (Matthew Atkinson) apartment, where she’s found Thomas yelling at and manhandling the Hope mannequin.

Hope’s just told Thomas to let go of the mannequin, and Thomas looks utterly confused standing in between the two Hopes.

According to The Bold and the Beautiful spoilers, Thomas will spiral out of control right in front of Hope’s eyes. Thomas might still be seeing the mannequin come to life, which should be pretty terrifying for him, given that the real Hope is standing right there.

Thomas will probably have to confront the fact that he’s seeing two Hopes, and a part of him will surely know that one of them isn’t real.

It looks like viewers will see some intense scenes as Hope takes action and gets Thomas to calm down and face what’s going on with him. Thomas will be acting delusional, and Hope will probably remember what John “Finn” Finnegan (Tanner Novlan) said about Thomas possibly having a head injury.

Perhaps Hope will try to get Thomas to realize that what’s happening to him is the result of an injury and she can talk him down.

Meanwhile, on the new episode of B&B on Wednesday, December 2, Steffy Forrester (Jacqueline MacInnes Wood) and Liam Spencer (Scott Clifton) will continue to reel from their evening together.

As B&B viewers know, Liam and Steffy drank too much and made love, and then Liam spent the night on Steffy’s couch. Now it’s morning, and Steffy and Liam are trying to determine where to go from here.

It’s likely that Steffy and Liam will have a conversation about what to do about their affair. Steffy and Liam may decide that they need to keep what happened to themselves, at least for the time being.

Since Bold and Beautiful spoilers say that Steffy will discourage Liam from doing something he may regret, it looks like Steffy could be the one who decides that they should keep a lid on what they did for now.

Steffy may urge Liam to go to Hope and find out exactly what happened with Thomas. Since Liam is determined that he saw Hope kissing Thomas at Thomas’ apartment, he may be reluctant to do that, but it looks like Steffy will insist that Liam needs to give Hope the chance to explain herself.

We’ll see what Liam decides, but ongoing B&B spoilers indicate that it will be a while before Hope and Liam finally talk.

Wednesday’s episode of B&B sounds action-packed, so be sure to tune in! We’ll keep you up to speed on all the latest Bold and the Beautiful spoilers, updates, and news. Here at CDL, we’ve got you covered!