BY Annemarie LeBlanc on January 14, 2020 | Comments: one comment
Related : Soap Opera, Spoiler, Television, The Bold and the Beautiful 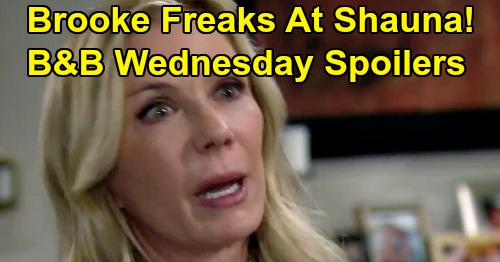 The Bold and the Beautiful spoilers for Wednesday, January 15, tease that Wyatt Spencer (Darin Brooks) and Flo Fulton (Katrina Bowden) will continue their conversation together in the Forrester guest house.

Wyatt was visiting with Quinn Forrester (Rena Sofer) in the main house, when Shauna Fulton (Denise Richards) came along and revealed that Flo was back and that she was alone in the guesthouse.

Well, of course Wyatt made a beeline for Flo, and now the two are reconnecting and catching up. Flo has been away for several weeks, off on a soul-searching mission and re-evaluating her life.

Flo had been through a lot in the past year, with her involvement in Reese Buckingham’s (Wayne Brady) horrible baby swap and adoption scam, and then her kidney donation surgery.

And that doesn’t even count the pain that Flo suffered when Wyatt dumped her a while back. But now Flo’s back on the Los Angeles scene and she’s ready to face whatever comes her way, and if her mom and Quinn get their way, she’ll start fighting for Wyatt again very soon.

Shauna has already encouraged her to fight for the man she wants, while Quinn has urged Wyatt to admit that he still loves Flo. Ongoing B&B spoilers indicate that Flo and Shauna will soon get their wish, as Wyatt will eventually dump Sally Spectra (Courtney Hope) for Flo.

But for the time being, Flo and Wyatt will decide to show up at an event together, when Katie Logan (Heather Tom) calls a meeting of her family and closest friends. What Katie wants will apparently be a puzzle to Wyatt and Flo, but they’ll choose to go together.

Meanwhile, on the new episode of B&B on Wednesday, January 15, Brooke Forrester (Katherine Kelly Lang) will learn some information that will make her blood boil.

It appears that she’ll be talking with Ridge Forrester (Thorsten Kaye), when he admits that he and Shauna have shared a few kisses here and there. Well, that’s not going to settle well with Brooke, who will be infuriated that Shauna has moved in on her man.

Even though Ridge and Brooke have signed divorce papers, those papers have not been signed, and Brooke will probably let Ridge have it for fooling around with someone else when he was also begging her to reconcile and give their marriage another chance.

It appears that the revelation of Ridge and Shauna’s kisses will start a chain of quite unpleasant events. According to B&B spoilers, all hell will break loose when Brooke hears about the kisses, and she’ll be quick to confront Shauna over them.

That will lead to some insults being hurled, and Brooke will once again haul off and slap Shauna.

Shauna will then get backup from Quinn, who will be standing by when the slap occurs, and soon there will be a huge Forrester war, with Quinn and Brooke going head to head.

It will apparently get so vicious that Eric Forrester (John McCook) will feel compelled to step in and get involved in the spat, so viewers can look for some major drama coming later this week on that front.

It sounds like a lot of drama is heating up for Wednesday’s episode, so stay tuned! We’ll give you updates as more news comes in. Stick with the CBS soap and don’t forget to check CDL often for the latest Bold and the Beautiful spoilers, updates, and news.