BY hellodrdavis on March 4, 2020 | Comments: 2 comments
Related : Soap Opera, Spoiler, Television, The Bold and the Beautiful 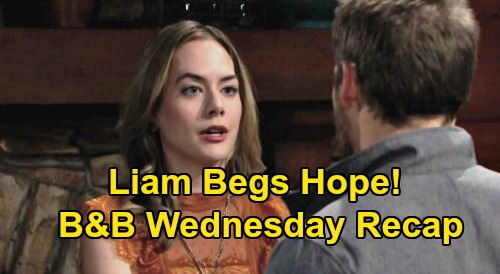 The Bold and the Beautiful spoilers recap for Wednesday, March 4, reveal that Steffy Forrester (Jacqueline MacInnes Wood) and Liam Spencer (Scott Clifton) spent time together at Steffy’s place with Kelly Spencer (Colette and Avalon Carlish) and Beth Spencer (River Davidson and Madeline Valdez). Liam was melancholy over not being able to live with Hope Logan (Annika Noelle) and Beth, and Steffy tried to comfort him.

Steffy said that she had hoped that things would get better for him, but it hasn’t. Liam said that Steffy shouldn’t blame herself for what happened, and Steffy flashed back to Thomas Forrester (Matthew Atkinson) orchestrating the kiss on the cliff.

Liam said that hoped the he and Hope would be able to work through what happened eventually, but that it wouldn’t be easy because of the kiss. Steffy looked totally guilty.

Talk then turned to Thomas’ manipulation of Hope, specifically to how everything changed when Thomas signed the custody papers. Liam lamented that things would have been different if not for Thomas.

Steffy said that Liam wasn’t wrong, and that Thomas caused chaos in all of their lives, but that Liam shouldn’t let those feelings overwhelm him – rather, he should concentrate on the kids, and that he shouldn’t forget how much she and the kids love him.

Hope comforted the little boy, as he cried out, “No Mommy, don’t let them!” Thomas talked with Douglas, saying that he’s just really excited to marry Zoe, and that once he did, they’d have a real family again.

That really upset Douglas, who cried out, “No, I already have a Mommy. Hope is my Mommy!” Hope reassured Douglas that this won’t change anything, and Zoe told Douglas that she was nervous too, which appeased him a little bit.

Hope told Thomas that he wasn’t really giving Douglas a chance to absorb all of this, and she took Douglas off to get a snack, looking back at Thomas angrily.

Later, from the CEO office, Thomas talked on the phone to Vinny Walker (Joe LoCicero), who was dismayed to hear that Thomas told Hope and Douglas about the accelerated nuptials.

Thomas gloated that Douglas had freaked out, and that he was just trying to give him the life and the family he wants. Vinny couldn’t believe it and tried to talk some sense into Thomas, who promptly hung up on him.

Zoe then returned to the office, upset about Douglas’ reaction. She thought that if Douglas wasn’t ready, then they could wait, but Thomas said he had something to show her.

He showed her two wedding dresses – one for her and one allegedly for the Hope For The Future (HFTF) line. Hope then barged in the room and slammed the door, saying that Douglas was now in tears and that she was furious with him for upsetting the little boy.

Thomas said that the sooner he and Zoe get married, the sooner Douglas would get used to it. He showed Hope the sketches, noting that one is for Zoe and the other could be the HFTF showstopper. Hope was annoyed and didn’t want to talk about work right now. Zoe got a text and left, and Hope started in on Thomas again, waiting to know what happened to communication between them as parents.

Thomas said that he knows what Douglas really wants, but that Hope wasn’t willing to make a life with them. Steffy arrived at the door just in time to hear that last comment, and she asked what was going on here.

Hope told Steffy that Douglas was upset because Thomas and Zoe are getting married right away. Hope then left to check on Douglas, and Steffy blasted Thomas for arranging a quick wedding to Hope.

Steffy said that she didn’t want to believe that he was still manipulating and that she had wanted to give him the benefit of the doubt. She blasted him for arranging her kiss with Liam, saying that she thought he was thinking about Kelly and her family.

Steffy said that Liam and Brooke Forrester (Katherine Kelly Lang) were right all along. She wondered what Thomas was going to do – push Douglas until he stops the wedding, hoping that Hope would marry him instead? Thomas said that she was reading too much into this, as Steffy walked over and noticed the two sketches.

Next, over in the Forrester design office, Carter Walton (Lawrence Saint-Victor) had some papers for Zoe to sign. He noted that he was shocked when Ridge Forrester (Thorsten Kaye) told him how the engagement happened. He thought it was an amazing family and that she’d fit right in. Zoe mentioned Douglas being upset with the quick wedding, and Carter did a double take as Zoe said Thomas wanted to get married right away.

Finally, at Hope’s cabin, Liam dropped by to bring Beth home. Hope fumed about Thomas dropping the quick marriage bomb on her and Douglas earlier, and Liam got the whole story about the quick wedding.

Hope didn’t entirely buy it, saying that she believes Thomas really cares about Zoe, but that she didn’t understand why he wanted a quick wedding. She told Liam that Thomas was even suggesting that she take a step back so that Zoe could bond with Douglas, and that it felt like he was ripping Douglas away from her.

Liam said that that’s what Thomas wanted her to think, and that it was all part of the plan. He urged Hope not to let Thomas get away with this.

That was a great episode of B&B, and there will be more drama heating up, so be sure to stay tuned. We’ll give you updates as more Bold and the Beautiful news comes in. Stick with the CBS soap and don’t forget to check CDL often for the latest B&B spoilers, updates, and news.