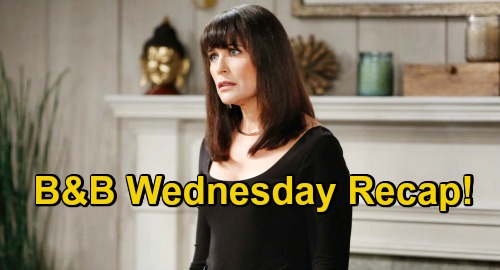 Steffy was exasperated, saying that she was skeptical at first, too, but that she had spoken to Thomas and that she knows how much Thomas misses Douglas.

Liam noted that Douglas was thriving with him and Hope, and that Thomas had abused his relationship with Douglas in the past. “I haven’t forgotten,” Steffy said, while Liam openly questioned the wisdom of Thomas being in Douglas’ life too much.

Steffy insisted that she had seen changes in Thomas, and that it wasn’t all an act. Then Steffy changed the subject and mentioned how much Kelly Spencer (Colette and Avalon Gray) loved Liam and lit up whenever she saw him. Liam indicated how much he loved Kelly, and Steffy said that Thomas felt the same way about Douglas.

Liam said that he’d try to give Thomas the benefit of the doubt with Douglas, but that he’d always be wary of Thomas’ feelings for Hope.

Meanwhile, at the cabin, Thomas and Douglas enjoyed a happy reunion while Hope looked on, smiling. Thomas told Douglas that even when they weren’t together, he was always thinking about Douglas.

Douglas said that he knew that, and he mentioned that if he left Hope and Liam’s place, then he’d miss Beth Spencer (River Davidson and Madeline Valdez) but that he loved Thomas, too. “What is it, Douglas?” Hope asked.

Thomas said that wanted Douglas always to be as happy as he is now, and that he got so lucky having a kid like Douglas. Douglas smiled big.

Douglas then went to work on his math homework, asking Thomas to stay before he did. Hope said it was ok for Thomas to stay, and she told Thomas that he was a good father.

Thomas looked truly touched, and Hope said that she’d always be guarded but that she could see the Douglas and Thomas were happy together, and that it made her happy.

Douglas then returned and showed Thomas his extra credit math homework. Thomas was proud of Douglas, saying that Douglas must have gotten his smarts from Caroline Spencer (Linsey Godfrey).

Over at the Forrester mansion, Eric Forrester (John McCook) talked with Shauna Fulton (Denise Richards), who said that she needed to move out.

“I can’t stay,” Shauna said, noting that Quinn Forrester (Rena Sofer) should be there. “It’s complicated,” said Eric. Shauna thought that Quinn should move back in, and Eric balked about being alone.

Shauna then told Eric that he wouldn’t be alone, since Zende Forrester Dominguez (Delon de Metz) was staying at the mansion. “You won’t reconsider?” Eric asked. “It’s time.

This is your home with Quinn,” Shauna said, noting that Eric was a wonderful man. “I see why Quinn is fighting so hard to get you back,” Shauna said.

At the beach house, Wyatt Spencer (Darin Brooks) and Flo Fulton (Katrina Bowden) were talking about Shauna moving out of the guesthouse when Quinn walked in.

After a little conversation, Wyatt and Flo spilled to Quinn about Shauna still staying at the guesthouse. Quinn was horrified and upset, and she was ranting about Shauna lying to her when Shauna walked in.

“How could you! How dare you!” Quinn yelled. Wyatt asked that Shauna and Quinn be nice to each other, but Quinn ranted at Shauna, who said that it was Eric who insisted that she stay at the mansion.

That was a terrific episode of B&B, and there’s plenty more coming up tomorrow, so stay tuned! Stick with the CBS soap and don’t forget to check CDL regularly for the latest Bold and the Beautiful spoilers, daily episode recaps, and news. We’ve got you covered!