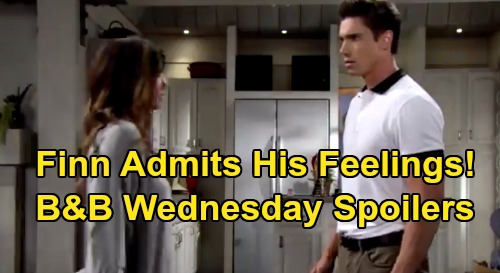 The Bold and the Beautiful spoilers for Wednesday, September 16, tease that John “Finn” Finnegan (Tanner Novlan) will end up getting honest about his feelings. As B&B viewers know, Finn has just received a visit from Liam Spencer (Scott Clifton), who quizzed him about his feelings for Steffy Forrester (Jacqueline MacInnes Wood).

Finn was steadfast and didn’t cower in the face of Liam’s questioning, but it’s likely that the talk with Liam has made Finn realize that he is indeed developing strong feelings for Steffy.

Well, Finn has promised to stop by Steffy’s house, and it looks like he’ll do so on Wednesday’s episode of the Bold and the Beautiful. Viewers will remember that Steffy initially called Finn to come over so that she could ask him for another refill of her prescription pain meds.

However, shortly after Finn told Steffy that he’d come but that he wouldn’t give her another refill, Steffy got some illegal pain pills from Thomas Forrester’s (Matthew Atkinson) friend Vinny Walker (Joe LoCicero).

It appears that when Finn comes by Steffy’s house, he’ll tell her about his conversation with Liam, and he’ll also confess that he’s developing feelings for her that go beyond a doctor/patient relationship.

That probably won’t come as a big surprise to Steffy, as she seems to feel something more for Finn as well. Ongoing B&B spoilers for later in the week say that Finn and Steffy’s relationship will take a turn, and we’ll see them share their first kiss.

Meanwhile, on the new episode of B&B on Wednesday, September 16, Thomas will find himself in the same airspace as Liam, and things won’t go well.

We’ll see how Thomas and Liam come to find themselves together – Thomas could come to pick up Douglas Forrester (Henry Joseph Samiri) at the cabin, or perhaps Liam will drop by Forrester Creations to see Hope Spencer (Annika Noelle). Whatever the case, Thomas is going to take issue with Liam pretty quickly.

It seems that Thomas will hear Liam expressing his ongoing concern for Steffy, and Liam might even bring up his suspicion about Finn wanting more than a doctor/patient relationship with Steffy.

Well, that’s going to rub Thomas the wrong way, and Thomas will give Liam an earful about how he gave up his rights to worry about Steffy’s love life when he chose to be with Hope.

According to B&B spoilers, Thomas will needle Liam about wanting the best of both worlds. After all, Liam chose to make a family with Hope and Beth Spencer (River Davidson and Madeline Valdez) and to leave Steffy and Kelly Spencer (Colette and Avalon Gray).

Thomas will almost certainly point this out to Liam, and he’ll give Liam a hard time about wanting to police Steffy’s love live.

Wednesday’s episode sounds terrific, so be sure to tune in! We’ll be sure to give you updates as more B&B news comes in. Stick with the Bold and the Beautiful, and remember that CDL is your go-to place for all the latest soap spoilers, daily episode recaps, and news.